Atlanta, GA -- (ReleaseWire) -- 11/24/2020 --Political power comes at a cost, and money isn't the only currency people are interested in. No one understands this more than author Dr. Glenn Toby, a man who went from sleeping on trains in New York City to running an international holdings company and talent management companies.

In his new book, The Asian Power League, Dr. Glenn Toby examines the intersections of business, politics, race, and power through the eyes of Michael Hy-yung, heir to his father's successful business ventures who pivots his own goals towards politics in a bid to be the next and greatest President of the United States. To get there though, he aligns himself with the Asian Power League, a secretive yet deeply influential political organization. Through this alliance, Michael reaches new heights of success, but also must come to learn the true price of power.

The Asian Power League draws from Toby's own experiences with racism and business in America, examining the crossroads of the Black and Asian experiences—where they intersect and where they diverge - and the power that these types of experiences offer through an exciting story of political intrigue. This novel offers a "short pathway to power, politics, and the human experience" as told by a businessman and philanthropist who has a breadth of personal experience in all of those fields.

This novel speaks to the power of the individual and the power of dedicated communities, all while offering a fictional window to the very real underbelly of the powerful in America. Order now for the fresh perspective on race and power in The Asian Power League by Dr. Glenn Toby.

About Dr. Glenn Toby
Dr. Glenn Toby is an entertainment pioneer, entrepreneur, philanthropist, motivational speaker, advisor to the stars, and author. Dr. Toby grew up in Brooklyn, facing hardships that fueled his drive to succeed. His greatest passion is philanthropy, starting with his Book Bank Foundation in Brooklyn with the mission to combat homelessness, poverty, and abuse. Throughout his career he has worked with some of the most popular stars in sports and entertainment, and written and produced films, all with the goal of inspiring the world to reach for success.

Dr. Toby is best-known to focus on providing new perspectives in business, charting new waters in the world of international business and thinking outside of the box in philanthropy. He thrives off fresh ideas and inspiring perspectives which he brings to all business ventures.

As a man with a diverse background of success and accomplishments, he has earned a lifetime of respect among his clients, associates, and peers and has no plans to slow down on his path on making an impact for long lasting change. 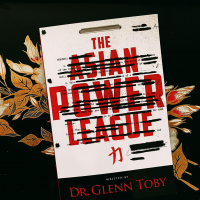