Mount Coolum, Queensland -- (ReleaseWire) -- 03/05/2015 --Queensland businessman, Stuart Mason has been awarded the prestigious top prize in the Standard Bank of South Africa's worldwide Water4Africa Competition for his 'SpaTap' invention. The SpaTap is a pocket sized, durable, portable, energy-free water dispenser that can be operated as a tap or shower. When fitted over any new or used plastic or glass bottle, the bottle acts as a water reservoir. When the bottle is inverted, water is dispensed as a flow-controllable shower or tap.

SpaTap beat 470 other entries and was recognised as a real solution to address the complex issue of water access and conservation in Africa. Mr Mason's innovation will provide easier access to clean water, improved sanitation and the creation of an innovative water related educational program in Africa. SpaTap will help to minimise diseases relating to poor water, sanitation and unsafe hygiene practices.

With production originally funded through crowdsourcing, SpaTap has multiple uses aside from providing taps in developing countries such as Africa.

Mr. Mason explains. "I originally designed the SpaTap for my own use whilst camping but then I saw its potential for use in disaster relief situations, third-world countries, sporting clubs, fishing, educational facilities, mobile first aid and so on."

"The reaction we've received worldwide to the product is fantastic and the Water4Africa prize is a great validation of its further potential," Mr. Mason said.

"As well as providing portable access to water and ensuring water conservation, SpaTap has the added benefit of 'up-cycling' plastic and glass bottles. For too long they have been discarded as rubbish with dire consequences for the planet. This is one way of repurposing them."

So what's next for Stuart and SpaTap?

"On a local level I'd like to see SpaTap picked up by a major retailer so that Australians can have their own SpaTap for use when traveling, holidaying, working or at home."

"On an international level, since winning the Water4Africa prize my goal is now to take SpaTap to the next level and find a partnership organisation to help me ramp up production and secure distribution channels to remote locations and disaster relief organisations worldwide."

"Although a simple invention in many ways, in the context of its use in developing countries, SpaTap has the ability to save lives. I am committed to ensuring that we save as many as possible."

Diarrhoeal disease statistics:
In terms of morbidity, mortality and economic cost, diarrheal disease is one of the most important issues in the world today.

Water conservation
If every person in Australia used a SpaTap to wash and shower it is estimated the amount of water saved would exceed 162,585,965,000 liters annually. 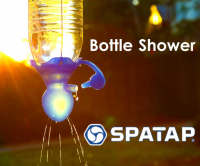 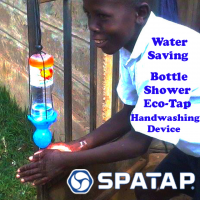 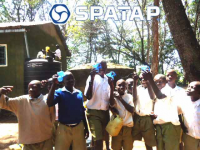