Indianapolis, IN. -- (ReleaseWire) -- 10/16/2007 -- Ian Stroud, a sales manager of a mortgage lender in Indianapolis, and the host of “Finance America”, a radio talk-show, gets a few strange looks when he meets with clients and business partners. This could be attributed to the longer-than-normal hair he’s been sporting for the past many months.

In early 2006, Stroud decided to start growing his hair, with the end goal of contributing it to Locks of Love. “God blessed me with a healthy head of hair, and when I learned of children who grow up without hair due to disease, there was no way that I couldn’t help,” says Stroud, when asked about his motivation. “I figured that I could go through a few years with hair longer than what is expected of a businessman, if it meant that a child would benefit.” Locks of Love is a non-profit organization that provides hairpieces to financially disadvantaged children under the age of 18, who are suffering from long-term medical hair loss. It uses donated hair to create hair prosthetics of the highest quality. Most children helped by the organization have lost their hair due to a medical condition called alopecia areata.

On October 20, 2007, Stroud will finally cut his hair, which will then be saved and mailed to Locks of Love in Florida.

Ian Stroud is a consumer advocate for fiscal literacy in Indianapolis, Indiana, and is nationally recognized for articles to consumers. 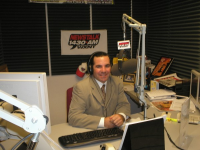