As bicycle accident attorneys in San Francisco, Rahman Law PC supports the goals of Bike East Bay to improve access and safety for bicycling as an integrated part of San Francisco’s transportation system.

Shaana Rahman, principal and founder of Rahman Law PC, is a member and frequent sponsor of Bike East Bay. The goals of Bike East Bay are advocacy, education, and community engagement. As bicycle accident attorneys in San Francisco, Rahman Law PC supports these goals as part of a mission to improve access and safety for bicycling as an integrated part of San Francisco's transportation system. To further the advocacy of bicycle access and safety, Ms. Rahman is also a member and sponsor of the San Francisco Bicycle Coalition, the Marin County Bicycle Coalition, and Bike SLO County (formerly the San Luis Obispo County Bike Coalition).

Ms. Rahman has sponsored Pedalfest all seven years. She and members of the Rahman Law PC team will be participating at Pedalfest in Oakland to help raise awareness of safety through visibility and bicycle lights in particular this year. They will be offering a raffle of a Monkey Light from MonkeyLectric, a San Francisco bicycle wheel light company (http://www.monkeylectric.com). Rahman Law PC wants to help increase bicyclist visibility and talk to cyclists about other education and advocacy opportunities underway designed to decrease collisions between bicyclists and vehicles, including Vision Zero SF, the road safety policy with a mission to bring traffic deaths in San Francisco down to zero. Anyone interested in stopping by Rahman Law PC's booth will also have the opportunity to Go Live on Facebook with them for a free messenger bag with the Rahman Law PC bicycle logo.

"We want to participate in events like Pedalfest with Bike East Bay where education and advocacy are promoted within the community because they generate a positive public image of bicyclists," said Ms. Rahman. "Community involvement is crucial in making our streets safer to reduce bicycle collisions, which is why we believe in spending so much time advocating on behalf of bicyclists." The bicycle accident attorneys at Rahman Law PC participate in City hearings, advocacy meetings, public events, and private speaking engagements to continue their work on making the streets safer for bicycles.

More information about Rahman Law PC's bicycle advocacy can be found on their website at: http://www.rahmanlawsf.com/personal-injury-lawyers-practice-areas/bicycle-accident-attorney/ 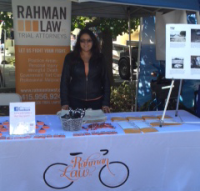