Hong Kong, China -- (ReleaseWire) -- 08/15/2018 --Light sticks are incredibly popular throughout Asia and are growing in popularity in the United States and other regions as well. From concerts to festivals to other events, light sticks help to take the celebration up a notch.

Rainbow Infinity is a new LED light stick that purports to be better than all the rest. Most of the current light sticks on the market offer minimal customization, if any, and can typically only be used once. Rainbow Infinity, on the other hand, has LED lights that can produce nearly 17 million different color combinations. It comes with 12 light patterns already programmed into the device, and users can create up to 4 custom settings of their own.

Users can control Rainbow Infinity using its associated mobile app, soon to be available on both Android and iOS platforms. The Android version of the app will be available in January 2019, with the iOS version following in February. The light stick interacts with the mobile app through a basic Bluetooth connection, which is standard on most modern smartphones.

This light stick is infinitely reusable as well. It operates with a 18650 lithium rechargeable battery, which is readily available in most markets. Due to shipping restrictions, the creators of Rainbow Infinity are unable to include the battery with the device at this time so users will have to provide their own.

Users can recharge the battery using a standard micro-USB cable, which comes with the product. Rainbow Infinity is fully operational without a battery as long as it is plugged into a power source, including mobile power banks.

Aside from special events, Rainbow Infinity is also useful in a variety of other scenarios. It can be used as a reading light in bed or as a flare to alert other motorists of a broken-down vehicle, to name just a few options.

The creators of Rainbow Infinity have completed the prototype of the device and the associated testing. They are now ready to move forward with production but require additional funding to do so. They are launching a crowdfunding campaign on Indiegogo with a flexible funding goal of $50,000. Those who contribute to the campaign can get a Rainbow Infinity light stick for just $39 and can expect to receive the product in time for Christmas 2018. 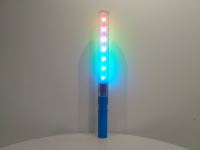