Neither lost nor forgotten after being casually torn down, the home of Pulitzer Prize winning author Ray Bradbury finds new life. In homage, Saint Arbor creates 451 bookends from the salvaged remnants of what could have been a beloved literary landmark.

Los Angeles, CA -- (ReleaseWire) -- 06/16/2015 --It was the house that creativity built. Now an iconic home is in pieces after being quietly demolished by 'starchitect' Thom Mayne who plans to build a new one in its place. Still, there's some good news for the home of Pulitzer Prize winning author Ray Bradbury. Narrowly diverting a landfill, some of it has been salvaged and given to craftsmen devoted to carrying on its memorable past. Thanks to the Los Angeles reclaimed wood furniture company Saint Arbor, and salvaging organization The ReUse People, an effort now underway brings goodwill. Enterprisingly, the like-minded companies will create something tangible with the house's remains.

Saint Arbor has been commissioned to create 451 limited edition bookends from repurposed wood donated by the Bradbury estate. Each set will be individually numbered in homage to the author's most famous work, Fahrenheit 451. Donation of the home's reclaimed Douglas Fir was made to The Reuse People. The organization will make pricing and availability for the bookends known in the coming weeks.

Jon-Ryan Riggins, the owner of Saint Arbor said of the restoration project, "As of now, the public believes that the house went to a landfill. We want people to know that the material was salvaged and we're taking great care to preserve it. It's an honor for Saint Arbor. Mr. Bradbury lived in this home for 50 years and wrote some of his greatest works there. We think it should be remembered well."

With a minimalist philosophy Saint Arbor creates handcrafted furniture for both home and commercial use. Adept in the creation and design of custom furniture from salvaged materials, the company has created bespoke repurposed furniture in downtown Los Angeles for two years. In addition to giving new life to salvaged American lumber, the company plants ten trees for every piece of custom furniture they make. To date the young company has planted 7,000 trees.

The Bradbury 451 bookends began production with full support of the Bradbury family in early June. Each set will be branded with a series number from 1/451 to 451/451 as well as the icon "451 F" to commemorate the best-selling book. Also included will be a certificate of authenticity and thank you letter from The ReUse People.

About Saint Arbor
Saint Arbor is a Los Angeles, California based custom furniture company that creates handcrafted pieces from repurposed wood. To give new life to salvaged American lumber the company works closely with non-profit organizations to preserve materials from demolished homes in and around Los Angeles. 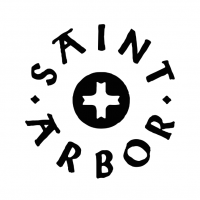 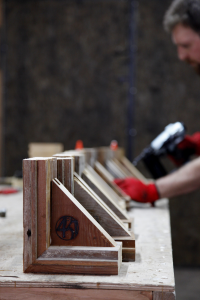 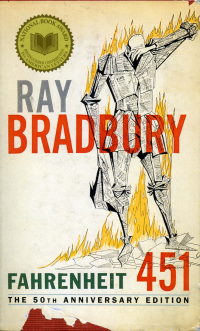