The app developed for users to concentrate while testing their awareness of rail signs thru timed modules and exam. But be careful, one wrong move and "your fired" is generated by the system. Starting from the beginning and trying again is usually the app users delight when exercising with the R.D. Murray Signal app. The app follows eastern corridor railroad signal protocol and functions within the parameters of NORAC guidelines which coaches the app users understanding of signs.

Train, stay alert, and have fun is what makes the R.D. Murray Signal app the first and only application for conductors, engineers, and general railroad compliance workers. App users learn and train on the go while using a tool to refresh knowledge of railroad signs. The exam module in the R.D. Murray Signal app sharpens skills of rail sings with intense down to the wire precision, utilizing accurate information for app users who like to exercise brain waves.

When traveling at high speeds rail workers must be aware of signals to increase safety. The R.D. Murray Signal app helps conductors and engineers prepare for those decisive moments. Download the R.D. Murray Signal app and play friendly competitions with digital flash cards for rail signs. Preparation for certification exams thru the training tutorials takes users from novice to expert. 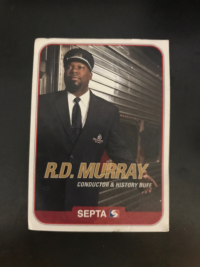