People in the Washington D.C. area interested in learning how defend themselves in an effective way in real life or death situations, have an extraordinary opportunity to learn from one of the best. Benjamin Drader, reality self-defense expert and US Army veteran has announced a special January 28th Personal Protection Seminar to very high anticipation.

Washington, DC -- (ReleaseWire) -- 01/06/2017 --The sad truth is most martial arts deliver poor protection when it comes to street self-defense. There's no doubt at all military veteran and reality self-defense guru Benjamin Drader and his school District Combatives is the exception to the rule. In exciting news, Drader recently announced he will be holding a special District Combatives Personal Protection Seminar in Washington D.C. on January 28th, 2017 where Drader will deliver potentially life changing information teaching attendees how, when push comes to shove, they can be their own bodyguard.

"Personal safety is a personal responsibility," commented Drader, whose resume features highlights like directly for two National Security Advisors, a Secretary of State and a Director of the CIA. "Choosing to be unprepared for a violent encounter could make you an accessory to your own assault."

According to District Combatives, some of the topics being covered in the Personal Protection Seminar include highlights like: how to identify and detect violent threats – an absolute must to be able to defend against them; how to deescalate potentially violent encounters; how to defend against violence using an appropriate levels of force – which could be the difference between a self-defense situation and criminal charges; and the secrets of tactical disengagement, to avoid an encounter escalating or being pushed further.

In addition to being a U.S. Army veteran, Drader has a lifetime of martial arts experience at the highest levels in his background, having trained extensively in Jiu-Jitsu, Muay Thai, Special Combat Aggressive Reactionary System (SCARs), Tony Blauer's Spontaneous Protection Enabling Accelerated Response (SPEAR) system, and holding both a Black Belt in Krav Magda and having served as a Chief Instructor in a well-respected Krav Magda school. All this (and more) filtered through his own real world experiences forming the foundation of the curriculum of District Combatives.

Feedback for Benjamin Drader's work at District Combatives has been consistently passionate.

Alex Cohen, Sales and Marketing Professional, recently said in a five-star review, "District Combatives is an incredibly practical and fun school for learning self-defense. First of all, it is a great workout: class always begins with exercises to get and keep you in shape, and I always leave feeling that I've gotten a solid workout. But the real magic of class is in the way Ben teaches realistic self-defense. He's a master at training the basic skills, and building on them so that in a very short period of time, you feel confident that you could defend yourself from a wide variety of attacks. I can't stress enough how effective this school is at teaching and testing reality-based self-defense skills. If you've ever wanted to know what to do if you were kidnapped, attacked, (or worse), and you've wanted to train your reactions to be effective, powerful, and in-control, then absolutely join District Combatives." 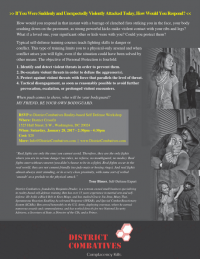