Life As A Lie, by Rebecca Perere, finds Flora in 1650 Spain beset by murder and betrayal, but a handsome highlander has his own plans for her.

Flora’s nineteenth birthday party goes horribly astray. During an unsuccessful attempt to rape her, Flora’s evil uncle Jose confesses to her he murdered her beloved father. When he sells her, Flora is faced with a bleak choice: Stay in Spain or take the risk of a new life of adventure but unknown future with Moray Macleod.

Moray MacLeod, Laird of Clan MacLeod, is a Highlander known for his power and rugged good looks. A strong and virtuous man, yet he possesses a tender heart. Bound by a father’s promise, he hurls himself at the danger threatening his life and the life of the woman he loves.

Will Flora and Moray find happiness neither one expected? Will the dangers, lies and evil in Spain follow them to Scotland, threatening to destroy the life she's grown to love?

Rebecca Perere's extensive world travel and love for historical romance is what prompted her to begin writing. She has spent the last three years honing her craft and choosing exactly the kind of story she wanted to tell. She captivated local newspaper readers with her comic, "Bad Dog," as well as being an accomplished artist. Born and raised in California, she now lives happily with her family in Louisiana, where she is at work on her second novel.

The ebook version of Life As A Lie, ISBN 9781622874545, published by First Edition Design Publishing, is available on-line wherever ebooks are sold. 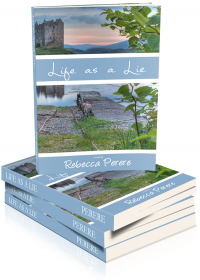