From June to August, Indie Campers reported a spike in bookings of 170%

London, UK -- (ReleaseWire) -- 09/11/2020 --Recurring reports from June to August have confirmed that British travellers' appetite for safe and independent travel this summer. Between June and August, British booking requests on Indie Campers platform reached an increase of 170%, compared to last year's peak season.

Boost in first-time campervan trips. With the increase of preference for a secluded holiday, campervan rental reservations are continuing to show growth in the tourism industry. Indie Campers have found that 64% their customers this summer had their first experience in a campervan this summer, the highest number recorded. These results are expected to be linked to the preference of safer mobility alternatives. When it comes to reducing the chances of contagion, this is a good travel option, since campervans allow groups to travel in an isolated, autonomous and flexible way.

Staycations are the trend of this summer. Staycations have been the go-to choice for many this summer, both in the UK and across the continent. This year, 84% of Indie Campers' bookings in the UK are from British travellers, with a low number of foreign travellers resorting to the British isles. "Interestingly, we have almost 2x more bookings in the UK this summer, compared to last, despite the fact that most bookings in 2019 were from foreigners, which confirms the preference for staycations in the UK", says Hugo Oliviera, CEO of Indie Campers. In total UK domestic bookings have increased by 500%, compared to July and August 2019. In terms of locations, London has seen the largest growth in summer bookings. As for Scotland, Edinburgh is the location with the highest increase in domestic bookings, suggesting a high demand for the Scottish outdoors.

70% of bookings are family trips. It is no longer just adventurous young people that are looking for a campervan adventure on the road. This summer, Indie Campers found that the majority of their bookings were family campervan trips, as more than 70% of UK customers went travelling with their family. The second-largest travel group were found to be "couples" (18%) followed by "friends" (8%). "This, together with the high number of first-time campervan travellers, suggests that more and more travellers chose to travel in a campervan opposed to traditional holidays, due to its ability to stay safe, get away from the crowds and reconnect with nature," says Hugo Oliviera. 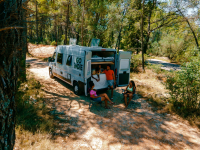