Reintroducing Royal Ringball, the Maya Sport That Thrived for Centuries

Sports that have withstood the test of time are phenomenal creations. For ballgame, the sport thrived for hundreds of years. Today Royal Ringball is here to bring back the sport with a smidge more action.

Los Angeles, CA -- (ReleaseWire) -- 03/23/2017 --Many do not realize just how far back the history sports go. In fact, the Mayans played a wide collection of sports. The most popular and the most theatrical of these sports, however, was the Mayan Ball Game or simply ballgame. The game involved the world's first rubber ball, invented by the Mayans themselves, as teams competed to knock the ball through a small stone hoop. Allegedly, the reward for the winners was a heroic feast, while the losers often suffered death by ritualistic sacrifice. Although the stakes were high, a combination of fast-paced gameplay, strategic depth, and mythical lore served to keep the game alive for hundreds of years. Today, a professional by the name of Martin K. Zitter and his team are working to revive a less gruesome version of the sport under the name Royal Ringball.

The game itself will be played with a rule set that is very similar to the original ballgame. Two teams will compete on a court sloped at two end zones, each of which contain three rings or hoops. The objective for each team is to knock the ball into their opponent's rings, gaining two or three points depending on which ring is scored on. To achieve this objective, players can knock the ball with any part of their body except their heads which is excluded for safety reasons. Once the ball is moving, it can never be caught, palmed, or grasped in any manner. The ball must remain in motion throughout the entire play.

This rule set combined with the frequency of contact that the game naturally creates will provide a spectator-friendly sport that is simple enough to grasp, yet complex enough to be near impossible to master.

To kick off the relaunch of this incredible sport, the Royal Ringball team plans to construct several arenas, some of which will contain key structures in the center of the field, adding a unique element to the game. As for the players, Royal Ringball is planning to host two elite teams of twenty players each. To select these players, a few thousand people will be given an opportunity to try out, letting masses of people get a taste for the sport. Sadly, this is no cheap venture. To remedy this issue, the Royal Ringball team has launched a crowdfunding campaign on Kickstarter. The first few thousand who support the campaign will be able to try out for the elite team and experience the thrill of the sport first hand. Through the support of readers, Royal Ringball hopes to bring back an ancient sport that deserves a revival. 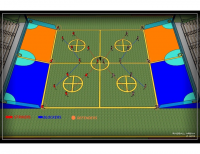