Ho’oponopono in Action Before the Secret

Wimbeley, TX -- (ReleaseWire) -- 07/13/2007 -- When Joe Vitale, famous contributor to the immensely popular movie and best-selling book "The Secret," heard of a Hawaiian doctor who had cured a ward of mentally ill criminals by sheer thought in 2004 — without ever meeting any of them in person — he dismissed it as an urban legend. But as rumors persisted, so did Vitale’s curiosity, and so he set out to search for Dr. Ihaleakala Hew Len, the mysterious miracle worker. He describes what he found in "Zero Limits: The Secret Hawaiian System for Wealth, Health, Peace and More" (Wiley, $24.95; 978-0-470-10147-6, July 2007, Cloth).

Dr. Len worked at Hawaii State Hospital for four years, starting at a time when psychologists quit on a monthly basis and people feared being attacked by patients as they walked through the halls. Dr. Len asked for the files of the dangerous patients, and set out to heal them by practicing the ancient Ho’oponopono system. He was going to heal the patients by healing himself.

It worked beautifully. After only a few months, patients who had been shackled were allowed to walk freely, those that were medicated were taken off their prescriptions, and some were even being released. Doctors even started returning to work.

The ancient Ho’oponopono system is based on an advanced perspective of total responsibility, meaning that everything in life – simply because it is in your life – is your responsibility. This includes politicians, diseases, and natural disasters. The problem isn’t with them but with you, and by healing yourself you can heal them. By changing yourself you can change them. When you own up to the responsibility of events that surround you, things will start going the way they should be going.

Joe Vitale and Dr. Len share their knowledge of the ancient Ho’oponopono wisdom in "Zero Limits," which aims to redefine our understanding of total responsibility. ZERO LIMITS reveals the breakthrough self-improvement approach that is proven to help people who are overworked, overstressed, and just plain overwhelmed deal effectively with removing self-imposed limitations in their lives, which are often manifested as chaos, disease, and poverty.

The system seems to be working, as ZERO LIMITS was already a best-seller on Amazon six months prior to publication. Spirituality and self-help guru Vitale has been called the “Buddha of the Internet” for his combination of spirituality and marketing tactics, and has written a number of books including the best-selling The Attractor Factor, There’s a Customer Born Every Minute, and Life’s Missing Instruction Manual, all from Wiley. Vitale’s next book, "The Key," is also scheduled to be published by Wiley in September 2007.

Dr. Len has worked with thousands of people, including groups at the United Nations, UNESCO, The World Peach Conference, Healers for Peace in Europe and the Hawaii State Teacher’s Association. He also has extensive experience working with developmentally disabled people and with the criminally mentally ill and their families. Today he travels and leads workshops on the Hawaiian method he loves.


"Vitale has captured the truth that all great spiritual, scientific, and psychological principles teach at the most fundamental level. Boil it all down to the basics and the keys are quite simple — the answer to all life's challenges is profound love and gratitude. Read this book; it's a reminder of the truth and ability you already possess."

— James Arthur Ray, philosopher and bestselling author of Practical Spirituality and The Science of Success 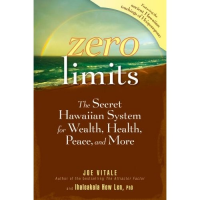