US Housing Slump: The Result of Poor Lending Practices, Economic Stagnation, or Lack of Focus?

More than 1 million foreclosures are expected over the next six years according to a study by First American CoreLogic. Due to these foreclosures, an estimated $112 billion will be lost to lenders, investors and remaining equity.

Vancouver, BC -- (ReleaseWire) -- 08/07/2007 -- Drive through any neighborhood and you are likely to notice an unavoidable truth: The country is in a housing slump. In fact, more than 1 million foreclosures are expected over the next six years according to a study by First American CoreLogic. Due to these foreclosures, an estimated $112 billion will be lost to lenders, investors and remaining equity.

A primary reason industry analysts point to for the housing slump is a basic economic principle: The supply of houses for sale exceeds the demand. Industry figures indicate that the number of houses going on the market in 18 major metropolitan areas has steadily increased each month. For example, at the end of June, 2.5 percent more houses were on the market as compared to the end of May.

Why are all these houses for sale? For many, the houses are on the market due to necessity. After securing an attractive two-, three-, or five-year adjustable rate loan, many homeowners have seen their monthly mortgages jump hundreds of dollars following the fixed period and, unable to pay the new amounts, they must foreclose.

The recent collapse of the subprime lending industry and discontinuation of many attractive lending programs have meant that for each home going up for sale, it is less and less likely that a buyer is available. Approximately 25 percent of homes bought from 1998 to 2006 were purchased using the services of a subprime lender and since late 2006, more than two dozen of these lenders have gone out of business. The result is an increased inventory of homes.

While this equation seems simple enough, Ron Velin of Velin Performance (http://www.velinperformance.com) believes there is a more pervasive cause to the housing slump: a lack of focus. He explains that although it is fun to focus on things like buying a house, consumption and spending can become unsustainable in the quest for happiness and contentment. Federal Reserve statistics indicate that as of May 2007, Americans 18 and over had accumulated $2.4 trillion dollars of outstanding consumer debt — this would mean that every man and woman aged 18 to 98 was carrying nearly $11,000 of consumer debt. Velin asks his coaching clients, “When was the last time buying what we wanted really gave us lasting happiness?” He then helps clients uncover what truly gives them meaning, focus and purpose. In the process, they gain a greater experience of abundance rather than a greater thirst for more things. With the work of coaches like Velin, national issues like the housing slump possibly can become a thing of the past. 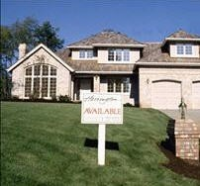