Asheville, NC -- (ReleaseWire) -- 08/21/2007 -- Original props, wardrobe and other rare collectibles from the book Sock Monkey Dreams are among the items being auctioned by the Red Heel Monkey Shelter, on eBay, through August 28, 2007. Vintage handmade sock monkeys – each with its own character trading card, original art, specially signed books and limited edition prints are also part of the fundraising effort to buy computer equipment for the shelter. (See http://www.bennyneedsabanana.com.)

Benny Hathaway, the sock monkey writer character from the book, is an outspoken advocate of Apple’s iBook, which he’s nicknamed the Banana computer. Hathaway was featured in a promotional commercial for his much-loved Banana, or iBook, as part of the award winning film Primates of the Caribbean, which won the Critics Choice award at the 2007 Sock Monkey Film Festival, in Rockford, IL. (video available)

When Benny’s trusty Banana computer went kaput last month, shelter residents and sock monkey collectors from across the country contributed items to the fundraising effort. The hard-working author insists that he’s not looking for a free lunch, just a new Banana. Publisher Penguin/Studio is donating a free copy of the book Sock Monkey Dreams with every vintage monkey given a new home in the Benny Needs a Banana campaign.

This is the largest known online sale of sock monkeys and sock monkey memorabilia, giving collectors around the world an opportunity to acquire rare items for their collections. Sock monkeys have been a part of American culture since the 1930s. Handmade vintage sock monkeys are especially sought after by collectors. At a time when mass produced imported plastic toys are being recalled, the whimsical hand crafted all-American sock monkey is experiencing a resurgence in popularity.

The Red Heel Monkey Shelter in Asheville, North Carolina, is a privately run facility that takes in homeless and abandoned sock monkeys. Founded in 1996, the current population is over 200, many of whom are featured in the book Sock Monkey Dreams (Penguin/Studio ISBN: 0670038083) by Whitney Shroyer and Letitia Walker with photography by Michael Traister. 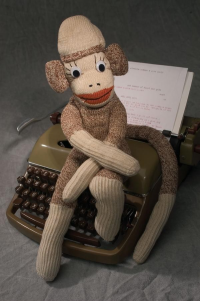 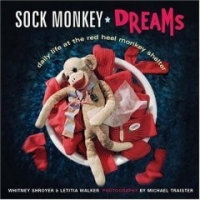