HDTV Cost Per Hour Down 11%

Perkasie, PA -- (ReleaseWire) -- 09/06/2007 -- All across the country, football fans are trying to figure out how to convince their spouse or significant other that they really should get a new HDTV for the upcoming football season. So in time for tonight’s opening kick-off to start the NFL’s regular season, here is “Professor Poor’s HDTV Hourly Cost Index for 2007”, or the "PPHHCI2007".

As a public service last year, Alfred Poor published a calculation of the hourly cost for HDTV in his free, daily "HDTV Almanac" on the Web. The item was a huge hit, so here is this year's update to that calcuation.

Using data derived from Nielsen Media Research’s benchmark figures, he assumes that two people will watch the new screen for an average of 4.5 hours per day. Based on a comprehensive review of cable and satellite services, he estimates an average monthly cost of $65 for high-definition service. (This takes into account that you will buy more than just the basic package in most cases, as well as the fact that some people will watch high-definition programming over the air for free.) The calculation is based on the purchase of a 42″ LCD or plasma flat panel HDTV. Using figures from Pacific Media Associates, the average price paid for the HDTV is $1,497. (Many people will get their 42″ set for under $1,000.) Finally, he assumes that you’ll keep the set for five years. (The fact is that many people keep their sets much longer, but he wanted to make this a conservative estimate.)

Now, a number of factors could be applied to make the costs lower. For example, you may be paying for some cable or satellite service already; the full subscription cost is included in the index. Also, it’s possible that HD service rates will decrease due to increased competition. Since this accounts for nearly three-quarters of the overall cost, that could result in significant savings. But the intent of the PPHHCI2007 is to give a snapshot for now.

Since a typical football game lasts three hours, you can now tell your significant other that it will cost less than $1 for you to enjoy it on a new HDTV.

Alfred Poor's HDTV Resource Center (http://www.hdtvprofessor.com) is one of the fastest-growing sites on the Internet for independent information about HDTV from an industry expert that you can trust. His free, daily HDTV Almanac (www.hdtvprofessor.com/HDTVAlmanac) provides news and commentary about HDTV and other related consumer electronics topics. Alfred Poor's book "Professor Poor's Guide to Buying HDTV" is also available at the Web site. 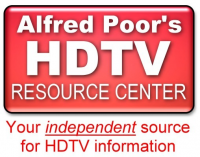