Roslindale, MA -- (ReleaseWire) -- 09/20/2007 -- YMAA Publication Center (with author, Arthur Rosenfeld) has brought the traditional Asian martial arts novel to the United States. And it used an unconventional approach to garnering book reviews. “We approached top Amazon reviewers directly and told them about our new novel,” says publisher David Ripianzi. “And, much to our delight, we immediately heard back from Amazon’s number one book reviewer, Harriet Klausner, who was interested in our title. She agreed to review the book, and she did. In fact, she wrote a glowing critique of The Cutting Season, calling it “fascinating” and praising the “fast-paced story line.”

Ripianzi explains, “For us, receiving praise from Klausner was every bit as exciting as getting a review from one of the top daily newspapers in the country … more exciting, perhaps, since it goes directly to the heart of what readers want: honest feedback about books from real people.”

YMAA Publication Center has been publishing martial arts books for nearly 25 years. Their titles include Qigong Health and Martial Arts by Dr. Yang (50,000 copies sold since 1985); Analysis of Shaolin Chin Na (more than 80,000 copies sold since 1989); and Sunrise Tai Chi by Ramel Rones (just released as a followup to a DVD, and critically acclaimed by Larry Lucchino, president and CEO of the Boston Red Sox, as well as Miriam E. Nelson, Ph.D., bestselling author of Strong Women book series). The Cutting Season is our first foray into fiction,” says publisher David Ripianzi. “Martial arts characters are hugely popular in America, so the time is right for the traditional Asian martial arts novel to be introduced to the U.S.”

Ripianzi chose Arthur Rosenfeld as his inaugural novelist after searching for several years. “We knew that we wanted to publish quality martial arts themed fiction, but the challenge has been finding the right author to launch our new imprint, YMAA Fiction. Typically, martial arts knowledge has been [in] the hands of people who don’t write fiction, and it’s a rare novelist who has the necessary advanced martial arts knowledge to craft a story in this genre. Rosenfeld is a true find. He possesses martial arts knowledge from traditional training, and he’s also an established and critically-acclaimed novelist. I don’t know of anyone else out there with his rare blend of talents and skills. We’re really excited to have him aboard.” 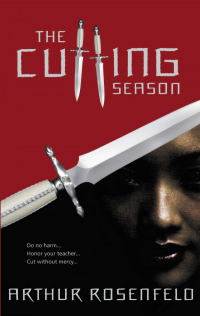