European tax haven banks are attracting money at record levels despite outside pressure to open their books. But while the money flows in there's little chance of countries like Monaco and Andorra co-operating.

Guildford, Surrey -- (ReleaseWire) -- 11/30/2007 -- Two of Europe's top tax havens - Monaco and Andorra - are seeing an influx of funds to their banks, despite governments worldwide actively trying to stop their citizens using tax havens to bank their money.

The financial industry in Monaco is attracting money from wealthy individuals seeking a degree of privacy, and keeping their assets away from the clutches of their governments at record levels with most of the money coming from the Middle East and Europe.

While the banks will not disclose the volume of money they have attracted recently, some industry analysts estimate it could be as much as 20 billion Euros over the last eighteen months, with 70 billion in total managed assets overall.

Over the last year and a half some of the big names in the banking and finance industries have set up offices in Monaco, including Goldman Sachs. And Monaco does not seem perturbed by outside influence unduly as the principality hopes to double the amount in her banks in the coming years.

And it's not just Monaco attracting funds - Europe's other tax haven Andorra has also seen an increase in interest, with new accounts in being established at the Andorra banks at a good pace. With tax havens attracting high volumes of funds it makes them less likely to co-operate with the OECD, who ultimately try to reign in and police money worldwide.

http://www.yourmonaco.com who specialise in European tax havens thinks that the OECD are wrong to assume that the money being deposited in Andorra and Monaco banks is by people simply wanting to keep their money offshore - it's also due to high net worth individuals taking Monaco and Andorra Residency.

'The number of people who have moved themselves as well as their money offshore has been rising over the last ten years, and in particular the number of UK ctizens moving to Andorra and Monaco has been high in the last two to three years, and their combined assets are significant. Taxes in the UK for example have been increasing, and it's no coincidence that while this has been happening so have the number of Britons moving out of the country. Rather than trying to dissuade people from doing so by painting tax havens as the villains they would get better results if they reduced direct and indirect taxes at home, negating the need to consider a tax haven in the first place.'

Evidence of the rising number of arrivals in Monaco for her tax haven status is the local property market, which is on a par with London as the most expensive property in Europe. And recent economic activity in Monaco includes the sale of one of the well known Monaco hotels - the Fairmont - showing that Monaco is able to attract investment not just from the financial services industry.

Particularly notable among the new arrivals in Monaco in recent years has been the British, with some Monaco real estate agents suggesting that around forty per cent of their enquiries now come from the UK.

The top rate of tax in the UK has been 40 per cent for some years now, but an increase in the number of indirect taxes - or stealth taxes as they are popularly known - often means a tax take of over 50 per cent for high earners.

Apart from the rise in the number of people moving to tax havens recently, the company also points to infrastructure improvements in both Andorra and Monaco as evidence that governments who levy taxes shouldn't assume that tax havens are ghost towns for much of the year with tax exiles only making fleeting visits for events like the Monaco F1 run each May in Monaco.

Andorra has invested heavily in road improvements for her ski holiday industry and several new hotels in Andorra have appeared in recent years. Earlier this year an announcement was made by the Andorra government that they had reached agreement with Spain to build a new airport fifteen minutes from the border, which will cut travelling time significantly as the nearest airport is currently Barcelona - ironically something which might entice tax exiles away from Monaco to lower priced Andorra.

Andorra property prices start at around 250,000 Euros for a good two bedroom apartment. Current Andorra real estate for sale includes a two bedroom two bathroom 68m2 apartment in the popular village of Arinsal at 284,000 Euros. Other villages popular for residency include la Massana, Ordino and the capital la Vella.

In Monaco, prices are considerably higher with one bedroom apartments regularly changing owner at over a million Euros, with Monte Carlo real estate the most popular. 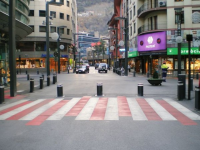