Lakeville, IN -- (ReleaseWire) -- 01/07/2008 -- When the votes were tallied, the working people of America picked a Union Pacific Locomotive Engineer from Minnesota as the quintessential American Worker for 2008. The “Search for the American Worker 2” competition was sponsored by the Working Person’s Store of Lakeville, Indiana, and Carolina Shoe Company.

“We posted the finalists on our website and invited our visitors to vote for the winner,” said Eric Deniger, CEO of Working Person’s Store. “Jason Lehnen, a Union Pacific Locomotive Engineer from Minnesota, topped the competition from a field of great entrants. He’ll be getting a complete head to toe rework of his work wear courtesy of the Working Person’s Store and Carolina Shoe Company.”

Mr. Lehnen said he has worked for the Union Pacific railroad for the past four years. “First as a conductor; now I am an engineer.” Prior to that he was a Harley Davidson motorcycle mechanic for four years, and said that he “proudly served as a United States Marine” for six years. The father of three daughters, he enjoys spending time with his family, riding his Harley and working out.

“The most rewarding aspect of my job is knowing that I am a part of the long standing tradition of the Union Pacific Railroad. American jobs for the American people,” added Mr. Lehnen. The WorkingPerson.com website will feature a video of Mr. Lehnen as spokesperson for The American Worker which will be shown on the site and at multiple online video channels, visible world wide.

Carolina and the Working Person’s Store are working to make life better for the American worker. They share the conviction that quality isn’t a luxury, it’s an absolute necessity. Customers at both Carolina and the Working Person’s Store can shop with confidence knowing the products offered have passed stringent requirements for quality, durability, comfort and outstanding value. 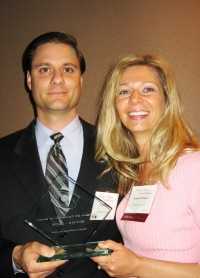