World-class Stretch Coach and former triathlete Brad Walker has his image featured on John Andretti's NASCAR for the 50th running of the Daytona 500.

Daytona Beach, FL -- (ReleaseWire) -- 02/22/2008 -- Last Sunday, the Daytona National Speedway hosted the 50th running of the Daytona 500. NASCAR fans called it the most anticipated event in racing history, and Brad Walker and John Andretti were set for one of the biggest races of their lives.

Brad Walker, head training coach and owner of The Stretching Institute (TheStretchingInstitute.com), is a member of the expert health and fitness team of HealthLife.com, Andretti's race sponsors. The Heathlife.com team featured on Andretti's car included a Guinness World Record-holder, an Olympic gold medalist, and experts in medicine, diet, and sports psychology.

“It was an honour to be asked to be a part of the HealthLife.com Advisory Board as the official Stretch Coach," says Walker. “But when they wanted me to be on a NASCAR travelling at nearly 200 miles an hour in front of millions of fans, my jaw dropped. I love motor racing, and being involved with HealthLife.com and John Andretti is a huge honour.”

With over 33 million viewers watching Sunday’s race at Daytona, Walker’s face was in front of a lot of eyes and he was understandably excited. “I felt like I was racing in the car with John. OK, maybe not in the car – but I was racing right there with him.”

Brad's career began after spending his high school years swimming and running track. While competing as a full-time professional triathlete, Brad saw his share of sports injuries. Responding to demand he began coaching athletes with special focus on injury prevention. Statistics showed amateur sports injuries on the rise, and the importance of preventative training became more obvious to the general public.

Walker's focus is to help ordinary people increase their flexibility and overall health. The 36-year-old has written five books on the subject, including The Stretching Handbook. People come from all over the world to his website, and TheStretchingInstitute.com site receives over 1 million unique visitors a year.

Brad Walker and his website, TheStretchingInstitute.com, have been featured in Runner’s World and Good Medicine magazines. The site offers books, DVDs, and sport-specific training techniques to help increase flexibility and prevent injuries in athletes of all ages and all levels of sports enthusiasm.

Unfortunately for Andretti, Brad's high-level success in professional athletic competition didn’t change the car’s fate at the finish line. After starting in the 22nd position, Andretti came in 40th.

When asked how he felt about Andretti's position, Brad responded, “It’s OK,” says Brad with a smile. “I was just along for the ride. And John's still a winner in my eyes. Besides, how many people can say they had their face on a NASCAR?” 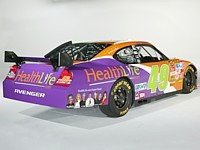