Kyrenia, North Cyprus -- (ReleaseWire) -- 03/02/2010 -- The stunning Malpas Hotel, North Cyprus, has received outstanding reviews, making it one of the best hotels in North Cyprus, more specifically one of the best Kyrenia hotels available. Its five star qualities has always made it a popular choice for holiday-makers, but it has so far exceeded expectations, and now the Malpas has swooped a top quality standard award to prove it.

Being awarded five star standards, the Malpas already stands out as one of the best hotels in North Cyprus. However, guests have felt that it has been a jewel in the crown of five star hotels feeling that it offers more than what is expected of a hotel of its calibre. A review posted on NorthCyprusHotels.com quoted that:

“The instant x factor when you entered the hotel, and the standard of rooms and services, beat many 5 star hotels we have already visited on this trip.”
Source: http://www.northcyprushotels.co.uk/malpas-hotel.asp

It's therefore no wonder that so many people make return visits to the hotel and are happy to post gushing comments about it upon their return from North Cyprus. What stands out most about this Kyrenia hotel is its staff’s attention to detail. From visitors comments it appears to be going that little bit further to make guests’ stays that extra bit special.

“...the rooms are spotlessly clean, compared with other hotels in North Cyprus which have been remarked on as ‘ok...”

Mr McLennan, on NorthCyprusHotels.com, remarks that “The standard of cleanliness throughout the hotel and the extensive grounds was outstanding.”
Source: http://www.northcyprushotels.co.uk/malpas-hotel.asp

In addition to its exemplary standard of hygiene, the hotel has also been praised for its excellence in the quality of its food. Hotels in North Cyprus quite often are renowned for supplying guests with local dishes, not always been to the taste of some visitors. The Malpas, not only offers a choice, including traditional dishes, but it also prides itself on the quality and flavour of its food. So much so that the chef is often available to greet guests and discuss his creations; definitely an assuring sign of pride and faith in his food, not to mention a service that only comes from an outstanding Kyrenia hotel.

If a hotel believes in itself, then it is inevitable that its guests will feel its sense of pride. The staff in this particular North Cyprus hotel emits that sense of pride wherever they are. Many previous guests have later commented on the customer service offered by the staff and the friendly manner in which they communicate with their guests.

“The hotel swimming pools provided plenty of space to relax in and were well attended by staff whose aim was to help.” - Harold from the UK.

Considering its attention to detail, the Malpas hotel, a Kyrenia hotel, is not surprisingly a popular choice for a vast array of guests. It quite clearly stands out amongst other hotels in Northern Cyprus. For further information, reviews and to book your holiday to the Malpas, visit NorthCyprusHotels.com and make sure that you don’t miss out on what it has to offer. 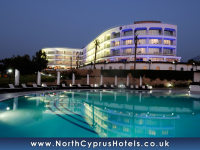