At the stroke of midnight tonight anyone hoping to cash in on the generous home-buyer tax credit will need to have a signed contract with a seller to qualify or you will have missed one of the best home buying programs in history.

Santa Rosa, CA -- (ReleaseWire) -- 05/01/2010 -- Real Estate Agents and Mortgage Brokers are working seven days a week, builders are staying open late and homebuyers are scrambling to get their offers in as they rush to take advantage of tax credits that expire at midnight tonight.

To qualify, buyers must have a signed contract in hand by the deadline and must complete the deal by June 30.

The tax incentives -- offered to both first-time buyers and some current homeowners -- are fueling a strong spring selling season and helping home prices stabilize. Real estate agents hope the burst in activity, along with the lifting of general economic gloom, will propel the housing market for the rest of the year.

Congress included the temporary tax credit in the $787 billion stimulus package signed into law a month after President Barack Obama took office last year. The idea was to bring the housing market back to life. Lawmakers, after intense lobbying from the real estate industry, agreed last fall to extend it until April 30.

Nearly 1.8 million households had used the credit as of mid-February at a cost of $12.6 billion, according to the Internal Revenue Service.

The government is offering buyers who haven't owned a home for three years a tax credit of 10 percent of the purchase price, up to $8,000. Single buyers with incomes above $145,000 and couples who make more than $245,000 are not eligible.

There is also a credit of 10 percent, up to a maximum of $6,500, for buyers who already own a home. To qualify, they have to have been homeowners for at least five years. The same income limits apply

The credit for first-time buyers is believed to be playing a bigger role in stimulating home sales this spring. Sales of new homes surged 27 percent last month from a record low a month earlier; it was the biggest monthly increase in 47 years. Sales of previously occupied homes, meanwhile, were up nearly 7 percent in March and are expected to keep climbing.

After the tax credit is gone, though, the surge could be short-lived. Many analysts project sales will drop sharply in the second half of the year. Some expect prices to plunge as well, especially if mortgage rates rise and a wave of foreclosed homes hits the market.

Though the number of new foreclosures has come down a bit, it remains near record levels. Nearly 7.4 million borrowers, or 12 percent of all households with a mortgage, had missed payments or were in foreclosure as of March, according to Lender Processing Services Inc.

Still, the housing market seems finally to be regaining its footing after the worst downturn since the Depression.

Numerous government measures have helped. They include: the tax credit, the Obama administration's $75 billion foreclosure prevention plan, the Federal Reserve's $1.25 trillion program to drive down mortgage rates, and about $126 billion in taxpayer spending to stabilize mortgage finance companies Fannie Mae and Freddie Mac.

The Obama administration touts its efforts to stabilize the market as a success.

"For most Americans, their house is their most important financial asset," Treasury Secretary Timothy Geithner told lawmakers on Thursday. "As the financial crisis wreaked havoc on household wealth, the administration moved to protect this critical component of stability."

Skeptics say that these measures are an attempt to manipulate market forces and that they are leaving housing vulnerable to a dangerous double dip. And many economists say the main effect of the first-time buyer tax credit was to bring would-be homeowners into the market sooner.

"Most of the benefits went to people who would have bought a home anyway," said Patrick Newport, an economist at IHS Global Insight. He estimates that the tax credits will spark only 350,000 to 450,000 additional sales for 2009 and 2010 combined. 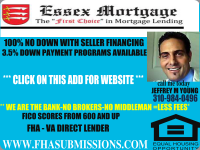