As an artist that has specialized in portraiture, including that of pets for many years, Ms. Montaney saw an opportunity to put her skills to work. She's been painting her heart out at their farm in South Carolina ever since.

It all began with the rescue of Lucky, a black labrador retiever puppy. She had been abandoned at the local country store and had been alone without food or water, and in danger of being hit by vehicles for several days. Lucky's rescue by artist Marlena Montaney and her husband not only brought a new joy into the household, but caused them to reconsider their status as pet owners. Lucky Dog was number 13, which meant they were in deep doo-doo. One of their rescued dogs had graced them with 6 puppies just a few weeks before, and the responsibility was mounting fast.

Clearly, something had to be done- Montaney saw the problem on a much larger scale than her own. Beyond a basic local acceptance of strays in their very rural area, there is no spay/neuter program. Unfortunately, although the local vet is the best deal in several counties, many people still aren’t able to afford basic care for their animals. Montaney hopes that installing such a program will make it easier for people to take care of their pets so there will be fewer strays next year, and happier, more healthy pets now.

The answer came in the form of art: Paint portraits and donate the proceeds to rescued animals and a spay/neuter/care program for the area, and support other pet-related charities. To that end, she created http://www.thesmilingdogcafe.com, a place where people can buy a keepsake portrait of their beloved furry friends, and leave a legacy for other, less fortunate pets.

Now Montaney’s work not only has value for her clients, but contributes to the well-being of animals in her care and beyond. That’s something to bark about! 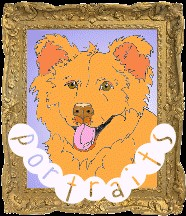