Boston, MA -- (SBWIRE) -- 01/25/2006 -- International development agency Oxfam America launched a national ad campaign on billboards, United Airlines’ in-flight magazine, and a United in-flight public service announcement to remind the American public that victims of disasters, such as the South Asian tsunami and hurricanes in the Gulf Coast, will need help long after the story is pushed off the airwaves.

“Oxfam’s work around the globe does more than just provide relief, we work with poor communities to envision a better future,” says Raymond C. Offenheiser, president of Oxfam America. “The same loss of lives caused by the tsunami occurs every seven days from avoidable poverty. Extreme poverty can – and must – be overcome.”

The Oxfam ad campaign is appearing in airports in Boston, Newark, Chicago, and Denver; on outdoor installations in New York, Massachusetts, and Los Angeles, and on all United Airlines flights. The in-flight print ads read: “People need more than relief. They need to know that their voice counts. They need to know they have a future. Oxfam America is committed to ending poverty wherever it may be in the world. From Indonesia to our own Gulf Coast we help local communities to not just rebuild, but build back better. Together, we can end poverty.”

The campaign’s goal is to drive home the point that recovering from disaster – whether in the southern United States or half a world away – is a long-term endeavor requiring continued support from donors and volunteers.

An affiliate of Oxfam International, Oxfam America has also launched a campaign for “Make Trade Fair” featuring A-list celebrities from music and film to highlight the issue of unfair global trade rules which keep people in poverty. This campaign is also designed to drive Oxfam core values, and convey the message that the organization delivers beyond immediate relief and works to end global poverty, empowering the world’s most marginalized communities.

About Oxfam America
Oxfam America is a Boston based non-profit organization that works to end global poverty through saving lives, strengthening communities, and campaigning for change. www.oxfamamerica.org. For more on the Make Trade Fair ads visit www.maketradefair.com. 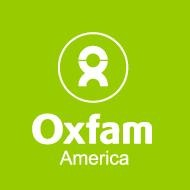