Buffalo Grove, IL -- (ReleaseWire) -- 12/01/2014 --According to the National Christmas Tree Association, the average freshly cut tree only lasts about 3-4 weeks indoors before it starts to lose its needles, less if it isn't properly watered. According to Good Housekeeping magazine, Popular Mechanics magazine, and most tree care experts, the most important thing a Christmas tree owner can do is to keep the tree well-watered by refilling the tree's reservoir often.

"That's where things go wrong," said Gary Chappell, inventor and CEO of Chappell Enterprises. "Most people don't like to crawl under the tree to refill the reservoir, so they put it off." Yet experts say that if the bottom of the tree dries out, even for a short period of time, it will affect the tree's ability to absorb moisture and keep the needles on the tree.

After spilling water on his wood floor trying to fill his tree stand last Christmas, Chappell decided to find a solution. The result was an ornament that can be hung on the tree like a decoration. "No more bending to refill the reservoir under the tree," said Chappell. "You just pour water into the ornament and it feeds the tree."

Since users need to know when their tree requires water, Chappell came up with a way for people to hear when their tree needs water. He also added an LED on the ornament that lights to let the users know when to stop pouring, avoiding overflow from too much water.

Chappell applied for a patent and took his idea to a few interested companies to license it. He was told it could be ready for the market by Christmas of 2016. Chappell was unwilling to wait that long to get this helpful solution into the hands of people who are annually frustrated as they bend, spill, and guess while taking care of their live Christmas tree. So, he teamed up with USA workers from across the country to engineer and build a product that could help people this 2014 Christmas season.

Chappell's invention is called "Jingle Well." Hand-assembled entirely in the USA by industrious American workers, this fun problem-solving device sells for $24.95 and can be found exclusively at http://www.myjinglewell.com 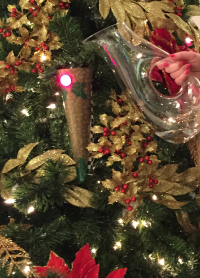