Seattle, WA -- (ReleaseWire) -- 12/10/2014 --Millions of tons of asbestos are still imported into the US each year and used in chemical and manufacturing industries. As a result, there are still consumer products containing asbestos.

Bergman Draper Ladenburg Hart has launched a campaign to raise consumer awareness of continued asbestos exposure risks and to bust asbestos myths that try to downplay these hazards. The Asbestos Myth Campaign includes easy to use resources and social media posts. These are designed to raise awareness of asbestos dangers and encourage those that have been made sick by asbestos exposure to get help. It also helps hold accountable those that continue to perpetuate asbestos use that sickens consumers and workers.

The Asbestos Myth Campaign intends to educate people on the risks associated with asbestos, correct the untruths they've been told about asbestos use, and to clarify why asbestos litigation to protect exposed workers is important.

Many people are aware that millions of workers and consumers have been exposed to asbestos. What they might not realize is asbestos hasn't been banned in the US resulting in potentially preventable illness. This issue cuts across all socio-economic and demographic sectors. It's critical that accurate information is presented to preserve the health of current and future generations.

Some important facts to know about asbestos exposure:

The World Health Organization says, "Approximately half of the deaths from occupational cancer are estimated to be caused by asbestos."
According to research by the Environmental Working Group, "Asbestos kills at least 10,000 Americans a year, claiming the lives of men, women and children throughout the country."
Most asbestos-related diseases are fatal and difficult to treat
Asbestos exposure can be second-hand, but is just as dangerous as direct contact
Many asbestos victims were exposed second-hand as children and are now dying."

Some of the myths we'll address in this informative campaign include:

To find out more about asbestos exposure and get information on the Asbestos Myth Campaign, visit http://www.bergmanlegal.com/asbestos-myths/. For press inquiries about the campaign, please contact Bergman Draper Ladenburg Hart today. 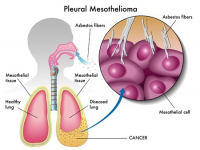