Atlanta, GA -- (ReleaseWire) -- 12/04/2014 --It is announced that D.J. Newbill is quickly becoming the top point guard in the NCAA and is poised to becoming a top lottery pick in the upcoming 2015 NBA Draft in June. He is currently averaging 28.5 points, 3.5 assists, 5.5 rebounds and 1.5 steals each game in leading Penn State University in recent wins against Akron and Bucknell. In the two wins this week, D.J. Newbill averaged a scorching hot 58.6 percent shooting from the field in addition to his 40 percent shooting from beyond the three point line.

Against Akron, D.J. Newbill scored 29 points on 67% field goal shooting, as well as 5 assists, 5 rebounds and a steal. While the game against Bucknell, he scored 28 points on 9 made field goals to go with 2 assists, 5 boards and a steal. D.J. Newbill is leading the Big Ten in points per game while averaging 25 each game. Among the many amazing feats of D.J. Newbill throughout his college basketball career is breaking the scoring record at Charleston Classic.

During the past week, D.J. Newbill has earned the Big 10 Player of the Week award. The award was presented to D.J. Newbill after leading the Nittany Lions in a second-half comeback against Akron as his team rallied from a 13-point deficit. With his per game average of 25 points, it was good enough for D.J. Newbill to be among the best guards in the NCAA and the 3rd best college basketball players in the country. If D.J. Newbill keeps shooting the lights out like he did against Akron and Bucknell, his status as a lottery pick in the upcoming 2015 Annual NBA Draft in June will be a no-brainer.

Every college baller is aspiring to pursue their careers after college in the NBA. Hence, D.J. Newbill is becoming one of the best collegiate players in Penn State University to ever join an NBA team. 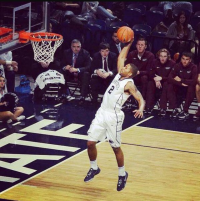