Smart Crowdfunding is slated to carry out strategic marketing initiatives for the ‘WiFiBoostGo’ project on Indiegogo. This campaign is crowdfunding to bring an intelligent state-of-the-art WiFi signal booster for smartphones to market.

Cyberport, HK -- (ReleaseWire) -- 12/09/2014 --Monzgear has launched a crowdfunding campaign on Indiegogo in order to introduce their highly innovative WiFiBoostGo to the public. This campaign has a funding goal of $50,000, which needs to be raised by January 18th in order to bring this exciting new technology to market. Described by Monzgear as "A WiFi signal booster with smarts", the WiFiBoostGo can improve the WiFi signal for smartphones while providing crystal clear WiFi, increase signal range by up to 600%, and expand storage capacity for smartphones or tablets. All of the features for WiFiBoostGo are managed through a simple to use App that is downloaded from Google Play or the App Store.

In the nutshell, the WiFiBoostGo is "an external WiFi booster antenna with a power bank for mobile devices". The fact that it is capable of increasing WiFi range by up to 600%, means that a reliable WiFi internet signal and stable live-streaming can finally be a stress-free reality. A hit-or-miss WiFi signal usually means constant "buffering" or loss of signal when trying to watch a video, make a Skype call, or play a game. This can add to a lot of frustration, and often causes the user to give up until they have access to their laptop. With the enhanced Wifi signal that WiFiBoostGo provides, this will no longer be a problem. Not only does the device boost WiFi signal strength, but the super-sized battery in WiFiBoostGo acts as an auxiliary power source to fully recharge your phone in under 60 minutes, up to five times before you need to recharge the device itself. WiFiBoostGo also has an SD storage card slot to increase storage capacity by up to 128 GB, enabling a user to free the limited memory space on their smart devices.

The Monzgear team has been hard at work with all of the essential groundwork for WiFiBoostGo, and the team is now ready to initiate the next phase in development which is why they have launched their crowdfunding campaign. All funds raised will be used to bring this product to market. WiFiBoostGo will be released in 3 versions: slim, bold and nitro, and four colors: red, gold, lime green and blue. There will also be a "Limited Edition WiFiBoostGlo" version which will only be available for their Indiegogo supporters. This limited edition version features a unique glowing antenna, hence the name "WifiBoostGlo". All WiFiBoostGo campaign supporters have the opportunity to pre-order a device at a greatly reduced cost during the duration of the Indiegogo campaign. The team is expecting to begin delivering the device to their Indiegogo supporters in March 2015.

About Monzgear
Monzgear is a subsidiary of Mobile Action LTD, and is committed to providing innovative & easy-to-use, short-range wireless connections to OEM's, manufacturers and system integrators. Their extensive technology portfolio includes a wide range of wireless modules, Bluetooth Smart modules & Wi-Fi products. Their newest innovation is the WiFiBoostGo which promises to be a must-have device for anyone with a Smartphone or tablet.

To learn more about the WiFiBoostGo crowdfunding project Click Here

To contact via email write to William Choi at: william@monzgear.com 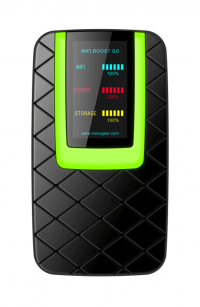