Isn’t it so obvious that greed and the desire for discriminatory economic and political power often interferes and manipulates liberal community structures and cultures into struggles over baseless individual differences?

In an introductory pattern, the release highlights the necessity for dynamic and interwoven approaches as prerequisite options in order to get the actual insight roots of ethnic conflicts.

In the line of thought, the CEO, Dr. Kelly NGYAH, explains that major phenomenal issues such as greed and the desire for discriminatory economic and political power, may often interfere and manipulate the social liberalist community individual into struggles over values which are equally shared within the community. As such, to make the difference, while uprooting facts from primordialist, institutionalist, political entrepreneurship and scarcity of resources as significant ethnic conflicts causal elements, the CEO probes in another debate question for researchers in the field, saying 'the causal dynamics of an ethnic conflict needs to be sorted in [its gain searcher-roots undercover actors]'.

In addition, the research material further utilizes, the manipulative, explanative and exploitative dimensions to elaborate on the fact that these undercover actors may not necessarily be members of either the concerned ethnicities or the affected communities, but, with exemplary cases, the international community, including major foreign government bodies could be involved in fuelling up ethnic conflict strives for selfish gains.

MAHSRA as well, indicates that it is undergoing a series of research works on community conflicts' intervention schemes and best ways for integrating pragmatic peace policy development and direct peace activity growth within local, national, intergovernmental, and international frameworks. And thus, is highly soliciting support from the public.

To support and/or partner with this organization and still obtain a specialized copy of this document this MAIL option is very useful. As well, the subject of the mail should be: Ethnic Conflicts Causes and International Community Biases
Direct copies are also available at:Amazon
Lulu and More...

Also to note, Supporters of MAHSRA's initiatives are also informed that, information on partnership as one of the donors of MAHSRA's Peace and Development works, may be published on the organizational website as it becomes necessary. As such, there is need to confirm in writing to MAHSRA, if a supporter's name should be included and/or published within the organization's funders' bulletin.

The Link to this MAHSRA Publication: is Ethnic Conflict and International Community Biases 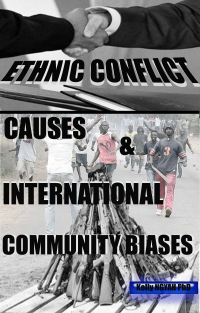