MAHSRA Releases Insights on the Virtual Conception of Tyranny and Peace

Bamenda, North West Region -- (ReleaseWire) -- 12/23/2014 --Modern Advocacy Humanitarian Social and Rehabilitation Association (MAHSRA), an NGO based in Bamenda – Cameroon and in Consultative Status with the United Nations Economic and Social Council ECOSOC [2013], has published some insights on the virtual conception of tyranny and peace.

Through an obvious analytical review on the current eventualities of governance crises faced within those countries which have had a regime change from an autocratic to a seeming democratic rule and for the need to discourage tyranny or autocratic governance options, MAHSRA's public concern in the direction has recently been assessed as one of the priority regards in facing global conflict challenges.

In this respect, the organization, under the dedicated leadership of its very active CEO, Dr. Kelly NGYAH, highlights that, comparatively, when a country under an autocratic ruler or a tyrant seems to be more stable and virtually peaceful than that which is going through a transitional democracy phase, then, such a masked notion of country stability, brings in misleading notions that autocracy or tyranny maybe the solution for Peace in States.

Of course, tyrants and autocrats possess the conditioned suppressive power to induce and maintain a country atmosphere which is free of major violent conflicts, but, can such a stable framework be sustained when they leave power?

In the attempt to explain the detrimental impacts of a prolonged tyranny rule over the long-term peace and stability of a country, the CEO, within the document, explains that the type of forceful customary allegiance earned within a tyranny rule is usually against the individual's free-will, and therefore, makes it impossible for maintaining such pre-existent stability when tyranny rule is toppled.

In addition, within more specific guidelines, the work examines example tyranny rules whose enlightened absolutist reigns have been toppled and compares the post-regime's country status on peace and stability with that of its former despotic or autocratic rule.

To support and/or partner with this organization and still obtain a specialized copy of this document this MAIL option is very useful. As well, the subject of the mail should be: Tyranny and Peace Direct copies are also available at: Amazon

Also to note, Supporters of MAHSRA's initiatives are informed that, information on partnership as one of the donors of MAHSRA's Peace and Development works, may be published on the organizational website as it becomes necessary. As such, there is need to confirm in writing to MAHSRA, if a supporter's name should be included and/or published within the organization's funders' bulletin.

MAHSRA Publications presents you with more major titles such as: PEACE AND TYRANNY 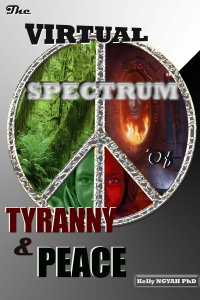