Both historical and modern conceptions of democracy prove it to be the ideal human governance model. However, is democracy just a means to promote individual liberties, or is it an ideal for achieving world peace and stability? There is a failure somewhere… Where?

Bamenda, North West Region -- (ReleaseWire) -- 12/23/2014 --Through its continuing efforts to promote global peace works, Modern Advocacy Humanitarian Social and Rehabilitation Association (MAHSRA), an NGO based in Bamenda – Cameroon and in Consultative Status with the United Nations Economic and Social Council ECOSOC [2013], releases another thriller document on the investigative faults of democracy on conflicts.

In view that several contrasting positions on the rule of democracy in local, national and global perspectives exist, the liberal democratic constitutionality approach is assessed to be the most practical methodology for applying democratic objectivism. But, in line with other internal legal dispositions under constitutional democracies, there is bound to be an incessant influx of contradictory and realist applications that create tensions within the society or, act as conflict mitigates.

In critique, such a realist and conflict promoter position of democratic politics highlights the detrimental extends to which, though striving to foster individual liberties and freedoms, the true nature of human egoistic and individualistic tendencies may 'licitly' steepen separatist ideologies and communities which are liable to inflict grave conflicts within the society.

In another regard, meanwhile individual liberties are analyzed and criticized to be a source of conflict in the society under the spectrum of democracy, at the same time, and comparatively, the conceptual appreciation of democracy with respect to other totalitarian governance models, is acknowledged to foster social and distributive justice meanwhile, preventing the very bitter strives.

As such, in line to brace more insights to the mentioned query, the CEO, Dr. Kelly NGYAH, within this study, primarily, paves the understanding of the concept of democracy from its historical roots to its modern development perspectives and then, uses liberal constitutionalist and representative democratic notions to examine the problematic of democracy as a conflict catalyst factor, as well as, a conflict preventer ideal.

To support and/or partner with this organization and still obtain a specialized copy of this document this MAIL option is very useful. As well, the subject of the mail should be:
Democracy and Conflicts

As a point of note, Supporters of MAHSRA's initiatives are also informed that, information on partnership as one of the donors of MAHSRA's Peace and Development works, may be published on the organizational website as it becomes necessary. As such, there is need to confirm in writing to MAHSRA, if a supporter's name should be included and/or published within the organization's funders' bulletin.

MAHSRA Publications present you with more major titles linking to: DEMOCRACY AND CONFLICTS 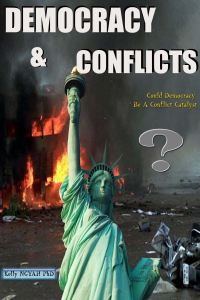