Individualism brings in a strong derogatory value against global solidarity and community ideals, yet, at the same time, through competivism and the notion of individual security and well-being, it becomes a vital utility factor for economic development within several perspectives.

Bamenda, Cameroon -- (ReleaseWire) -- 12/23/2014 --Within individualistic and criminal mind framesets towards redressing certain ignored conflict stimulant elements, and as a means to promote global peace, Modern Advocacy Humanitarian Social and Rehabilitation Association (MAHSRA), an NGO based in Bamenda – Cameroon and in Consultative Status with the United Nations Economic and Social Council ECOSOC [2013], investigates into the phenomenal conception of individuality and criminality as factors that drive conflicts within the society.

In modern times, the concept of individualism as understood and applied in the medieval period has been appraised inapt to address current eventualities which are now correlated with a number of dictums on individual liberties and freedoms towards the new millennium human development prospectus.

Within such shortcomings, modern variance in conceptive thoughts and practical human activities or habits has been making it very difficult to enforce strong communitarian and solidarity goals, therefore, inducing severe conflict driving links within the individualism concept.

In order to illuminate such conflict driving links, the CEO, Dr. Kelly NGYAH, uses a three level hierarchy flow phenomena, illustrated through a diagrammatic sketch of individualism to its conflict driving factors, and within which, the distinction between the individual's cognitive and non-cognitive human proclivity tendencies in relative positions with intensity levels of conflict ignition and building probabilities is measured.

Also, striving to be as non-pessimist as possible, MAHSRA innovatively highlights how the already condemned individualism concept could be applied in conflict prevention and mitigation procedures, as well as, for great human and economical development prospects.

To support and/or partner with this organization and still obtain a specialized copy of this document this MAIL option is very useful. As well, the subject of the mail should be:

About MAHSRA
Also worth noting, Supporters of MAHSRA's initiatives are also informed that, information on partnership as one of the donors of MAHSRA's Peace and Development works, may be published on the organizational website as it becomes necessary. As such, there is need to confirm in writing to MAHSRA, if a supporter's name should be included and/or published within the organization's funders' bulletin.

MAHSRA Publications presents you with more major titles such as: INDIVIDUALITY AND CRIMINALITY: Conflict Driving Elements 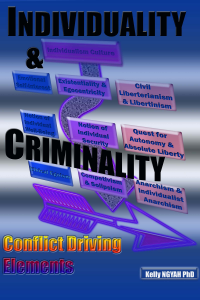