Los Angeles, CA -- (ReleaseWire) -- 01/07/2015 --California hip hop artist Tigers Craving Stars has released his long-awaited debut album titled, "Inside Out." A project that was years in the making, "Inside Out" is a fairly expressive album that sheds light on Tigers Craving Stars' passion for music while highlighting the ins-and-outs of his life experiences. The album features 14-tracks including the single, "Missouri Loves Company" and is now available on iTunes, Spotify, Amazon, Google Play and other online music retailers. Select songs are also available for streaming on Bandcamp, and Soundcloud at http://buff.ly/1Ilc5mS

Produced by Brainfire Technology and mastered by Jesse Barrera (The JB Cave), "Inside Out," features an assembly of talented vocalists and artists from across the country. In "Missouri Loves Company," a single from the album – the beautiful vocals from singer Daniela Andrade add a sophisticated sound to Tigers Craving Stars' emotionally infused lyrics.

The music video can be viewed on Youtube at: http://buff.ly/1B2dNHI

While the vast majority of the album is hip hop, it also syncs various elements of indie rock. With a familiarity in both genres, mainly due to his work as a songwriter and music producer, Tigers Craving Stars received a recent review noting his potential as an upcoming lyricist:

"These artists have some real potential, and I'm looking forward to seeing and hearing more from them. They have a serious yet light and unassuming style that lets the story do the talking." – StepKid.com

About Tigers Craving Stars
The Tigers Craving Stars story began in 2009. He had worked on many different award-winning and critically acclaimed albums while repeatedly pushing back the completion and release of "Inside Out." "I always knew that I wanted to tell my story; share things that I have thought, experienced, and witnessed. It was only a matter of time before it happened." He is influenced by the likes of Radiohead, Bjork, Foo Fighters, Dr. Dre, Jay-Z, Miles Davis, No Knife, Michael Jackson, and John Mayer, and is an artist who includes lots of honesty, emotion, and truth in his music. 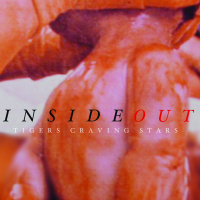