New York, NY -- (ReleaseWire) -- 01/27/2015 --Film makers Cherokee Hall and Heather Price partner on this topical thriller horror movie about a documentary film crew that goes in to an insane asylum only to discover that there is no way out. Trapped by a riot, ignored and covered up by a corrupt Warden, true terror on earth is released within the walls. The film also has a real life torture scene hidden in the project, a first for a horror film of its' kind.

"Working with Cherokee Hall" says Ratcliffe, "is always a true joy. He is passionate about film making, creative, energetic, giving, and always a true partner in the process. I am always so very honored and excited to be a part of his projects." 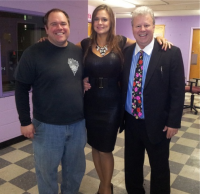