The widows and women of the Esu, Weh and Aghem communities have now seen an institutionalized dawn to their plea and plight against Babaric widowhood rites practice within their communities

Bamenda, Cameroon -- (ReleaseWire) -- 01/19/2015 --The Modern Advocacy Humanitarian Social and Rehabilitation Association (MAHSRA), an NGO based in Bamenda – Cameroon and in Consultative Status with the United Nations Economic and Social Council ECOSOC [2013], has once more proven its modern advocating potency in addressing very chronic global worries with regard to the status of women.

On the occasion of the official public presentation and ceremony of the widowhood rites to rights initiative for Esu, Weh and Wum localities that held on the 16th of January 2015 at the Wum Council Hall, the effective realities and pragmatic framework of international policy implementation towards the well-being and positive rights-based aspirations of vulnerable community women where made evident.

During the occasion, the CEO of MAHSRA, Dr. Kelly Ngyah in his primary speech enlightened all the authorities present on the direct implications of the barbaric widowhood rites practices inflicted on widows against national and international laws. After briefly elaborating on the exemplary cases of traditional rites practices that degrade the human dignity of widows and completely denies them of their freedoms, the CEO called on the fons (local Kings) of the concerned localities acting as the customary rulers of their people to join efforts in combating such discriminatory practices against their women. He as well duly emphasized that besides the heavy damage that such practices may cause on the psychosocial well-being of the community widow, much is lost in their potentials as development instruments and tools for their localities.

Dr. Kelly Ngyah emphasized that, because majority of the local community women are widows who are supposed to be the main source of agricultural produce within the localities, inflicting psychological damages and social injustice on them will seriously affect and reduce such produces, thus gradually driving the entire communities into abject poverty, hunger and starvation.

In order to consolidate the CEO's quest for better treatment for the rural widows, the three fons who came with their community representative council members (including the fulanis and Hausas) all made similar speeches which proved their commitment and understanding of the situation faced by their suffering women.

In line with the speeches, the delegate of women empowerment, the Mayor of the Wum council, the Governor of the North West Region and as well as the Canadian High Commissioner to Cameroon Rene Cremonese all acknowledged the worries faced by the local widows and encouraged the traditional authorities in their committed efforts to combat the barbaric widowhood rites practices against their vulnerable people.

The CEO of MAHSRA also presented the newly formed ombudspersons widowhood groups or associations who were to undergo organizational capacity building and inter-family and community conflicts resolution trainings to the public officials therein present such that, their duties as the community overseers will be facilitated and given due public government support.

To crown the occasion, an advocacy agreement was reached and signed between all three fons (local Kings) of Esu, Weh and Wum; the Senior Divisional Officer of Menchum Division and the CEO of MAHSRA. 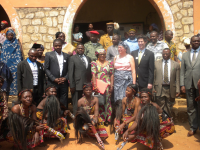 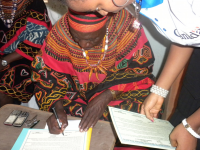 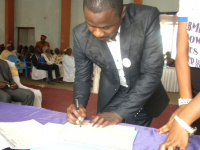 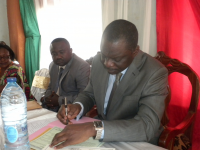