London, England -- (ReleaseWire) -- 01/20/2015 --My Talking Angela, the latest app in the juggernaut Talking Tom and Friends franchise from multinational entertainment company Outfit7 Ltd, skyrocketed to the #1 games app spot in 178 countries in its first week of launch.

Launched on all major platforms on December 3 2014, My Talking Angela helped Outfit7 set new records – exceeding 100 million downloads in one month across it's suite of apps and pushing the company's Monthly Active Users to a record high of over 240 million.

My Talking Angela had already set unprecedented download records for the Talking Tom and Friends franchise in its first week, having received over 2 million downloads on its second day and then going on to smash through the 10 million download mark by day seven. Fans across the globe played over 2.5 billion mini games within the app in its first month alone.

"The early stats of My Talking Angela prove that fans have been eagerly awaiting this latest edition of our most popular female character, and have readily adopted Angela onto their devices and into their hearts," said Samo Login, Founder and CEO of Outfit7.

Launched to follow the innovative Talking Angela app, My Talking Angela retains all the iconic characteristics of the popular Talking Tom and Friends apps. This cute kitty will talk back to fans and react to tickles and nudges in Angela's comic fashion.

In the app, you feed and care for Angela through nine stages, helping her grow from cute kitten to stylish cat, unlocking new activities and earning coins as you go. My Talking Angela encourages you to discover and play games with Angela, collect and trade stickers, and much more. You can also dress her up in the latest fashions, give her cute hairstyles, feed her treats, and decorate her home with new themes, styles, colors and furniture.

Furthermore, Outfit7's My Talking Angela app is nominated for the 'Overall Best App of 2014' category in the annual Best Mobile App Awards.

Download My Talking Angela HERE (http://outfit7.com/character/talking-angela/) and experience the fun and the glamor for yourself.

Talking Tom and Friends, has grown from an instant app success into a fully-fledged media entertainment franchise, with a movie in production and a CGI animated series in the works, a global licensing and merchandising program and a chart-topping sensation on YouTube. These lovable 3D animated characters have skyrocketed in popularity with fans across the world, with over 2B downloads since its launch and over 240M active users each month. 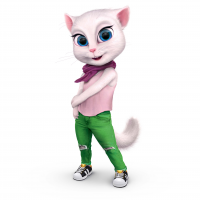