In a listed canal house in Delft, The Netherlands, a unique opportunity has opened to the public: to admire beam paintings dating from 1620 and to listen to the 500-year-old history of the house that is bearing the name ‘De beurs van Londen’, ‘The stock of London’.

Delft, Netherlands -- (ReleaseWire) -- 02/02/2015 --Before April 2014 nobody could imagine that behind the average looking facade of the canal house a real treasure is hidden. During the restoration of the oak beamed ceiling unique paintings were discovered. Besides floral ornaments two beams feature hunting scenes known as 'the long hunt'. Several men who can be identified by their clothes as a farmer, an officer and a nobleman are hunting a deer and a boar using various weapons.

This type of beam painting is very rare and their preserved high quality makes them very unique. The paintings are possibly related to the fact that in the period of 1623-1625 Englishmen inhabited the house. In that period the house got named 'De beurs van Londen', 'The stock of London'.

Based on the clothes the figures portrayed on the beam paintings are wearing, art historian Irene Groeneweg was able to date the paintings from 1610-1620, this coincides with findings from earlier historical research of the house. The farmers are wearing a type of coat that is also present on the painting 'Landscape with the fall of Icarus' painted by Pieter Bruegel the Elder in 1560. They are also wearing long trousers typical for farmers of the 16th and 17th centuries. The farmers use a pitchfork and a sable for hunting.

The depicted officers can be recognised by their rather short and straight trousers that reach till under their knees in the form of enormous garters. The officers carry muskets and spears. The officers portrayed on the beams are very similar to military figures depicted in the book of Adam van Breen, De Nassausche wapen-handelinge …, published in 1618. The similarity between the soldiers from a publication related to the Royal family and the paintings in the Delft canal house is intriguing.

One more figure featured on the beam paintings is a nobleman of older age. He is wearing breeches that were popular in the second half of the 17th century but were worn by aristocrats even until 1625. The way the figure wearing his garters, crossed above and below the knees and with a large bow attached to them, dates back to the 16th century.

The house contains a rich collection of English furniture dating from 1620 until the beginning of the 20th century.

Dendrochronological research showed that certain elements of the house date from 1544. Information from archives indicates that most likely the house was initially a warehouse of the nearby brewery. Around 1575 the warehouse was rebuilt and became a residential house. The house serves this function up until the present day.

'De beurs van Londen' requires a large restoration in order to preserve it for future generations.

Local authorities gave temporary permission for opening of the museum during restoration of the house.

On Facebook.com/debeursvanlonden you can find the developments and activities regarding the project. 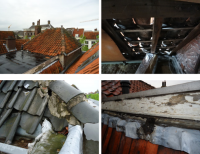