Phoenix, AZ -- (ReleaseWire) -- 02/13/2015 --An 11-month project came to fruition Wednesday when the bronze statue of Arizona's late Senator Barry Goldwater was unveiled during a dedication ceremony in National Statuary Hall. Craters & Freighters Phoenix has been involved with the historic statue since its inception.

In March of 2014, the company moved and installed the 8-foot-tall, 1,700-pound Goldwater statue from the foundry in Prescott to Arizona's State Capitol. Then in December Craters & Freighters experts uninstalled, custom crated, and conveyed the statue 2,300 miles across the country. Last week, they orchestrated its final installation in Washington, D.C.

"Barry Goldwater was a great man and deserves to the stand among our nation's most distinguished citizens in Statuary Hall," said president and owner Dennis Davies. "We are honored to have been involved with this momentous project and are thrilled to see it come to fruition."

Republicans and Democrats in the U.S. Capitol came together Wednesday to honor Goldwater, a conservative icon who served more than three decades as a U.S. senator and retired in 1987. He was also the Republican presidential nominee in 1964 and remains a revered figure among conservatives. The statue was created by Deborah Copenhaver-Fellows of Senoita, Arizona.

"Safely delivering oversized, delicate items like this statue is our specialty," added Davies. "Whether delivering a piece of Arizona's history or a piece of your family history, we ensure valuable shipments arrive safe, damage-free and on-time."

To watch a video of the Goldwater statues move from the Prescott foundry to it's installation in the Arizona State Capitol:
https://www.youtube.com/watch?v=KpLZCaGEU3A 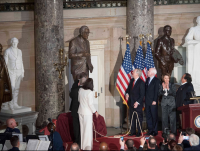