The latest results published by New Jersey's Division of Gaming Enforcement showed a second revenue increase in as many months for all of the Garden State's online operators. December 2014 ended a three-month downswing for the New Jersey's igaming outlets and that trend continued in January with all four networks contributing to an overall upswing of 7.1 percent.

Compared to December's $1,109,781.00 profit, Borgata made $1,283,746 (+16%) in January 2015. Similarly, the new low stakes playerpool sharing initiative between 888 and WSOP appears to be paying dividends as Caesars Interactive NJ's profit also increased. Following another busy month at the tables, the operator was to improve its December haul by almost $500,000 in the first month of 2015.

For casino gaming specifically, all of New Jersey's major platforms continued to thrive in January with each posting increased profits. However, the story of the month was the move by Tropicana from second to first in the overall rankings. Throughout 2014 the dominant force in the casino sector had been Borgata, but that all changed last month as Tropicana's $2,560,262 revenue was enough for it to edge past Borgata which posted a $2,501,406 profit.

Across the board, each New Jersey online casino managed to post improved profits; something which has resulted in a 6.3 percent increase compared to December 2014.

Although online poker revenues have dipped slightly compared to this time last year, the State's casino platforms have enjoyed a major upswing over the last 12 months. Despite losing Ultimate Casino late in 2014, the Garden State's remaining operators were still able to secure an overall increase of 54 percent in casino revenue.

"We are encouraged by the feedback we have received from players about our product, promotions and our player services team. We are seeing positive results with respect to the testing and optimization of our marketing efforts and we look forward to continuing to ramp those up over the next few months."

"The second successive upswing for New Jersey's igaming community is another sign that the industry is beginning to find its feet. Mixed results in 2014 caused some to question the viability of the State's online ecosystem; however, the first month of 2015 has shown that the Garden State is beginning to bloom."

For an in-depth look at New Jersey's igaming revenue for January 2015, please find a detailed breakdown inside our Google doc.

Use of any information, quote or images contained in this press release is permitted as long as full credit is given to http://www.newjerseycasinos.com/.

For further clarification of any of the information contained in this report, please visit: http://www.newjerseycasinos.com/category/nj-revenue-reports/

About NewJerseyCasinos.com
Founded in 2014, NewJerseyCasinos.com (NJC) is a leading authority on both live and online casinos in New Jersey. Focusing on industry news, interviews and reports, NJC has working relationships with each New Jersey operator and regularly provides advisory services for players and media members. 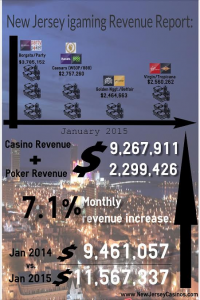