Kalamazoo, MI -- (ReleaseWire) -- 03/04/2015 --In his two seasons as head coach of the Western Michigan University football program, Coach P.J. Fleck has made his mark on both the team and the Kalamazoo community.

On the field, Fleck led the WMU Broncos to an 8-5 record last season after a 1-11 mark in 2013—the biggest turnaround in Mid-American Conference history. He has also received national media coverage, including a February profile in Sports Illustrated, on the energy he is bringing to the program's recruitment efforts. In fact, this year's recruiting class has been widely recognized as the best in the conference.

Fleck has also had a significant impact off the field, contributing to and taking part in numerous causes throughout the Kalamazoo community. One example is the upcoming Drive for Life, an event that looks to raise more than $400,000 for cancer research and survivors throughout southwest Michigan.

"Coach Fleck has proven himself to be a true asset to the city of Kalamazoo in a very short amount of time," said Aaron Zeigler, president of Zeigler Auto Group, one of Drive for Life's organizers. "Not only has he had success on the field for the Broncos, but he has also bought into our community and has contributed in some very meaningful ways. We are thrilled that he will take part in Drive for Life this year and look forward another great season of Western Michigan football."

"It gives both myself and all of our players and coaches a great deal of pride to be positive and contributing members of the Kalamazoo community," said Fleck. "We will continue to focus on these types of efforts in the future, bringing a high level of energy and commitment to everything we do."

About The 34th Annual Drive For Life
The 34th annual Drive for Life, which takes place this year April 23, is one of the longest-running charitable efforts in southwest Michigan. In addition to Fleck, the event will feature Jim Craig, goalie of the legendary 1980 U.S. men's Olympic hockey team. 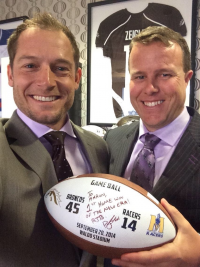