Weddy Is an Inspired New Way to Immortalize the Big Event

Smart Crowdfunding is slated to carry out strategic marketing initiatives for the ‘Weddy’ campaign on Indiegogo. The Weddy team is crowdfunding to bring their inspired photo App to the rest of the world, so they can help immortalize weddings everywhere.

Stockholm, SE -- (ReleaseWire) -- 03/04/2015 --Fredrik and Yessica Thor, the brother and sister team behind 'Weddy", have launched a crowdfunding campaign on Indiegogo in order to introduce their inspired Weddy App. This campaign has a funding goal of $80,000, which needs to be raised by April 4th in order to bring this App to the rest of the world. Weddy is a photo app for weddings that allows the happy couple to create their own wedding album, and immortalize the wedding through everyone's eyes with help from the guests, wedding party, and the Weddy App. It has already been successfully released in Sweden, and the team now wants to launch the App globally. They state, "We as wedding photographers want to take wedding photography to a new level and offer the couple and their guests an option to traditional and pricey wedding photography. The camera feature of a smartphone is constantly developing and we want to turn that into something new, fun and memorable."

Nearly everyone in this modern world has a mobile phone with a camera app. Taking a photo has never been easier than it is today, which is what makes Weddy such a wonderful and inspired idea. Now all guests or members of the wedding party can be a big part of memorializing the wedding for the couple. In order to use Weddy, simply download the App, which is available in the App Store or in Google Play. Once downloaded, the couple merely has to create a profile filling in all important details about themselves and their wedding. Once that step is complete, they can create a guest account to give to all of their wedding guests. Each guest that wishes to partake in memorializing the event simply creates their own account so that they can submit their photos to the album. The couple has total control over the sharing process of the photos, so they can determine which pics get sent to social media accounts and which don't.

The creative team behind this inspired App has been hard at work with Weddy. They successfully launched the App in Sweden, and are now ready to release it globally which is why they have launched their Indiegogo campaign. The funding raised with this campaign will primarily be used for App/website language development, marketing, and software development. They plan on launching the English version in June 2015, followed Spanish, French and German versions in September 2015. As an added bonus with this campaign, the team is offering several perks. These perks, which serve as funding incentives, range in value from a "Follow Us" perk enabling a supporter to follow the campaign and get all of the updates firsthand, to various Weddy packages and merchandise items. Full details can be found on their Indiegogo campaign page.

To learn more about the Weddy crowdfunding project Click Here

To contact via email write to Fredrik Thor at: info@weddy.se 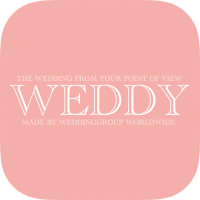