New York, NY -- (ReleaseWire) -- 03/09/2015 --Sterling Fox is a recording artist and songwriter from New York City. With his unique, narrative style of lyric writing and unusual melodies, Fox has slowly risen to prominence in the music world. He has worked with Lana Del Rey, Adam Levine, Madonna, and others mainly as a songwriter. The records he has worked on have sold more than 12 million copies. With the success, however, came frustration in contributing to the soul crushing cycle of meaningless pop music with little to no recognition.

That all changed in 2014, when Fox decided to pick up the microphone. He leaked several songs online "Holy" and "Ghost" that gained a positive response among blogs and listeners and was featured on Avicii's album True as well as the #1 Beatport hit "Colors". With his verbose lyrics and passionate vocals, Fox has gained a small cult following of loyal fans. Those include pop god Max Martin, who recently signed Sterling to his publishing company after hearing his songs.

sterling-fox-300 For Sterling Fox's latest release "Freak Caroline", he has ventured into the unusual territory of writing songs about the celebrity artists that he works with. In an absurd revenge for being unappreciated, he is now throwing them under the bus as characters in his songs. Names have been changed, but it's certainly fun to speculate which singer the titular 'Caroline' may really be. Lampooning the elite New York socialite set, she's described as a "suicide in a limousine, while daddy fills up the gasoline". The song is a rock song through and through, with multiple glam inspired guitar solos and a cacophony of screaming and bashing drums by the end.

If the song isn't fun enough, the music video is even more over the top. It begins as a chic, Bond influenced series of shots that eventually deteriorates into an all out fisheye filled 90s band performance music video. It's Sterling's way of deconstructing branded sexiness, and it effectively calls out the overstyled hype culture of the music industry and kicks it back to a bygone era of just having fun and playing in a band. Visually, it's very reminiscent of bratty rock and pop punk of yore, but musically elevates itself to a level of comparison with more robust sounds like those of Blur, The Pixies, Oasis, or even Bowie.

About Freak Caroline
"Freak Caroline" was premiered by Interview Magazine and was their song of the week. It released worldwide February 25 and is also available for free from Sterling's Soundcloud page. Be on the lookout for Sterling Fox's debut album Cheerleader Heaven coming April 21. Freak Caroline is by Sterling Fox from Silver Scream Records. 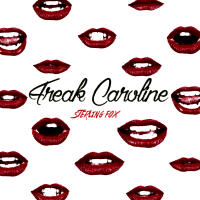