TeamZoom is an emerging effort for all entrepreneurs and creative artists to use as a social media platform to connect with investors and business developers.

Magliano Alfieri, Piedmont -- (ReleaseWire) -- 03/25/2015 --Creative artists and entrepreneurs with ideas for revolutionary projects, people like so always get left behind because they can't develop contact with the right entity for support, investment or feedback. TeamZoom is a clever incentive of concentrated effort taken by an ingenuous game developer and he is all set to get TeamZoom started with the help of crowd funding via IndieGoGo. Samuele Marro has been a game developer for four years and after experiencing the same troubles that every entrepreneur goes through while looking for the right contacts, the investors and etc. he decided to create TeamZoom. He states that these days it is not only hard but almost impossible to gain exposure on mainstream social media networks like Pinterest and LinkedIn due to the humungous amounts of users and the lack of investors/ developers.

Here is what Samuele Marro himself had to say about TeamZoom in an official statement "In my extensive years of experience as a freelance game developer, I understood one very fundamental thing when it comes to being a creative mind and an individual entrepreneur: things can get hard without the right people to work with. I realized that the work I had chosen for myself was too difficult and strenuous for me to do by myself and got started on creating my own team of developers. And that is when I found out how hard it is to find the appropriate business partners." He further added "This was my aspiration for TeamZoom, to help all creative minds and entrepreneual minded people to connect with business developers, investors and like minded entrepreneurs. TeamZoom is going to be up for crowd funding via Indiegogo, but we are already creating a referral program and with the progress that we're making, TeamZoom will be up in no time."

About TeamZoom
TeamZoom is stated to be an all-encompassing module and the only social network of its kind. Entrepreneurs and creative people can use TeamZoom to create new projects, to get feedback from like minded people and to crowd fund their projects/ ideas. TeamZoom connects artists and creators with professionals, it helps them to get in touch with investors and developers to bring their ideas to life and make their projects a success.

The creator of TeamZoom states it be a global creative movement and invites all entrepreneurs and creative persons to be a part of it and get more exposure. He believes that the social network is set to be a major breakthrough in the area of online crowd funding and business social networking in particular. 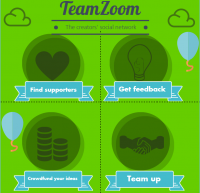