The objective of One Village Music Project is to create global cultural unity by bringing together teen musicians from all over the world. The funding requirement for this project is $50,000.

Austin, TX -- (ReleaseWire) -- 03/25/2015 --The One Village Music Project is a program of the Amala Foundation, initiated by inspired volunteer and Austin artist Phoebe Hunt in an effort to bring the message of The Global Youth Peace Summit to life through music. This program's objective is to unite teen musicians from all over the world to inspire them to serve humanity as individuals and leaders. In the beginning, the ambition of this project was to bring these young musicians from all walks of life together to record one song. Since the inception of this project, three week-long programs have been hosted to create two full-length albums. The first of these albums, "Precious Human Life", made it into the esteemed hands of The Dalai Lama.

The successful beginning of One Village Music Project can be attributed to the support and generosity of the Austin and Santa Rosa Music Communities. This support includes professional music studios, media centers, musicians and other artists that have donated their time and talents. However, according to Phoebe "This project can't survive by relying on favors forever." She has just launched a Kickstarter campaign to ensure a viable future for the One Village Music Project.

Talking about this musical program, Hunt says, "Popular music doesn't have to be the advent of a star, building up some at the expense of others. Music holds the possibility to empower all of us, from the musician to the audience and can be used as a mechanism to tear down the walls that separate us as we embrace our differences and strengthen our human connection to one another."

Holding true to this unity, Phoebe has called in her artist friends to help her with this campaign, and has received astounding support. Austin's own Shakey Graves, The Band of Heathens, Marcia Ball, Shelly King, Carolyn Wonderland, Wood and Wire, Whiskey Shivers and Jazz Mills as well as Nashville based Della Mae have joined a long list of inspired artists willing to donate shows to this Kickstarter campaign as Hunt strives to meet her goal of hosting this musical program annually. The primary funding goal of this Kickstarter campaign is $50,000. There is also a stretch goal of $100,000 that will help her host this program for years to come. The team expects that by expanding the outreach of their annual musical releases, they will become self-sufficient by generating adequate funds.

To find out more about this campaign, please visit http://kck.st/1FM1ROz

The official website of The Amala Foundation is: http://www.amalafoundation.org 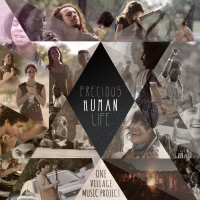