Murder accomplice David Stone will be played by Barry Ratcliffe in the cable show True Crime with Aphrodite Jones.

New York, NY -- (ReleaseWire) -- 04/16/2015 --The story of Rachael Anderson, murdered in 2010 in Idaho will be featured on the NBC Peacock Production slated to air on the Discovery I.D. Network and available for download. The accomplice to the murder, David Stone, will be played by veteran actor Barry Ratcliffe. 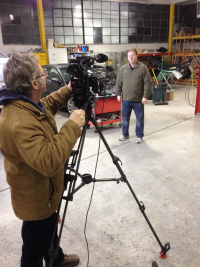