Barry Ratcliffe in "The Longest Ride" in Theaters April 10th

For those familiar with the Nicholas Sparks novel, Barry will be playing the role of the auctioneer in the upcoming feature film "The Longest Ride".

Los Angeles, CA -- (ReleaseWire) -- 04/07/2015 --Based on the bestselling novel by master storyteller Nicholas Sparks, THE LONGEST RIDE centers on the star-crossed love affair between Luke, a former champion bull rider looking to make a comeback, and Sophia, a college student who is about to embark upon her dream job in New York City's art world.  THE LONGEST RIDE explores the challenges and infinite rewards of enduring love.

"Being a part of such an amazing story and working with such an incredible cast and crew, I was captivated every moment watching and being a part of this vision take shape" says Ratcliffe. "From the creators and writers, to production, to the amazingly talented direction of George Tillman Jr., you could feel the project take shape, live the romantic beauty of the story, and revel in it's entertaining grace."

Barry cherished his role. He just completed Ted 2 in Los Angeles and is coming up next in "Masterminds" with Zack Galifianakis, Owen Wilson, and Kristen Wiig.

Temple Hill's Marty Bowen and Wyck Godfrey (The Fault in Our Stars, Twighlight) are producing "The Longest Ride" alongside Theresa Park. 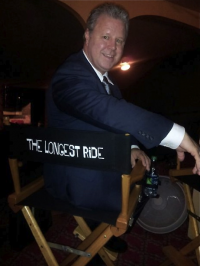