“Ready Rashid” is the story of a witty Arab boy’s life in a popular cosmopolitan city in the Middle East along with his family and friends. The CEO of OutFront Films Stephen Wisher needs funding support to bring this non-religious and non-political, animated movie to life.

New York, NY -- (ReleaseWire) -- 04/02/2015 --On behalf of OutFront Films, Stephen Wisher is pleased to present the Ready Rashid Creative Project. This is a unique cartoon project that aims to develop and globally distribute the first ever animated movie focused on the Arab/Expat family values. This thought provoking project will introduce the audience to an insight into modern family life, Islamic/Western values, upraised irony, new worldly perspectives, and so much more.

Ready Rashid is about an orphaned Arab boy and how he adapts to life in the cosmopolitan environment of a modern Middle East city. The family characters of the movie will portray a mix of traditional Arab/Expat values and roles interwoven circumstances that could be relevant to all families across the world. Though the film's primary focus is on the strong foundation of Arab culture and values, it will be presented and designed in a way that will be loved by people from all religions and cultures.

As the first step towards development and distribution, OutFront Films wants to align with a major animation production firm. Other than the physical production of the animation, this will enable them to access the media firm's natural connections to visual media outlets. They have just launched a crowdfunding campaign via Kickstarter to raise funds to produce the animation. The funding target of the campaign is $250,000, and this campaign will end on May 28, 2015.

Talking about the probable impact of this upcoming venture, Stephen Wisher says, "We believe the Ready Rashid project has a unique opportunity to address cultural and racial barriers— how? Just by not addressing them."

To find out more about the campaign, please visit http://kck.st/1GJ8UIh

About OutFront Films
OutFront Films is the NYC-based LLC that dreamed up and developed the Ready Rashid creative concept and cartoon media. Through solid working relationships with creative talent from around the world (USA, Europe, and Asia); this project has been prepared for development into all forms of cartoon media: Print, Animation, Film, Social Media, Licensing, and Merchandising. 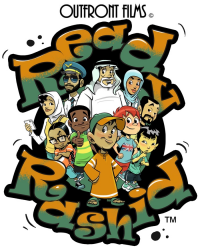