Phoenix, AZ -- (ReleaseWire) -- 04/08/2015 --Craters & Freighters Phoenix was selected to complete the final leg of a two-year project of replacing the bronze sculpture of John Campbell Greenway with that of the late Arizona Senator Barry Goldwater at Statuary Hall in Washington, DC.

The larger-than-life bronze sculpture of Greenway, which was displayed in Statuary Hall for 85 years, was returned to Arizona in February, and was subsequently installed for permanent display in the Polly Rosenbaum State Archives Building near the State Capitol last month.

"Craters & Freighters provided professional and thorough planning, shipping and installation of both the Barry Goldwater and John Greenway statues," said Joan Clark, State Librarian & Director of Arizona State Library, Archives & Public Records. "Thanks to their professional staff, we sent Barry Goldwater back to the U.S. Capitol and safely welcomed the outstanding Greenway statue to Arizona,"

The Greenway bronze was conceived by renowned sculpture Gutzon Borglum, the same artist who led the project of depicting the faces of George Washington, Thomas Jefferson, Abraham Lincoln and Theodore Roosevelt on Mount Rushmore. Greenway held executive positions in several mine, steel and railroad companies in Arizona and he was also a member of the Board of Regents at the University of Arizona. Greenway is also credited with building the mining town of Ajo, AZ. While in the United States Army, he was recognized for many heroic deeds and was the recipient of France's Croix de Guerre, the Legion of Honor, and the Croix de l'Etoile awards. He also received a Distinguished Service Cross.

"John Campbell Greenway played a significant role in early Arizona history, and to be selected as the crating and shipping provider for his final return home was an honor and privilege," said Dennis Davies, president and owner of Craters & Freighters Phoenix. "It took hours of logistical planning, not only here in Arizona, but also with the folks in Washington, DC as well." 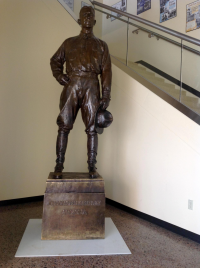