George Hatcher, a proponent of fair compensation, and a wrongful death consultant for over 40 years, understands that life is priceless. Nevertheless, to determine compensation, the lawyers, the law, the airlines, and the insurance companies have the impossible task of calculating a number figure that is incalculable. "The airline can never forget that the loss of a human life is the loss of something irreplaceable; reimbursement should somehow reflect that. The welfare of the surviving family members is not just a crucial factor. It is paramount."

None of the passengers and crew of Germanwings Flight 9525 survived, all victims of what, according to cockpit voice recordings, may have been a mass murder intentionally caused by 27-year-old Andreas Lubitz, the co-pilot. At the time of the crash, the pilot was locked out, and Andreas Lubitz was alone in the cabin, as the plane was directed toward the alps. An immediate consequence of this tragic event is that the European Aviation Safety Agency began recommending that two authorized persons always be in the cockpit when a plane is underway.

The GermanWings case will be handled under an international agreement called the Montreal Treaty or the Montreal Convention, formally, the Convention for the Unification of Certain Rules for International Carriage by Air. The Montreal Convention is a multilateral treaty under which there's a maximum cap an operator has to pay; however, that cap does not apply unless the operator (i.e. the carrier Germanwings/Lufthansa) can prove it had no culpability in the crash. "That's a dead issue in this case," explains Mr. Hatcher, "Therefore, the amount a family can get is technically without limit. The family must provide provable damages, This applies to pecuniary (economic) damages. Non-pecuniary damages, i.e. pain and suffering, etc. would have to be negotiated because there is no provision in montreal for that." 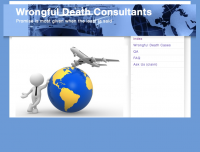