Lauingen, Germany -- (ReleaseWire) -- 04/14/2015 --Jenifer Brening, the little girl with the big voice, releases her first self written song and wants to fully take off with "ASAP". The only 18-year old pop singer can already look back on an impressive career. The vocal talent became known to an audience of millions through her successful participation in the music show "The Winner is"(SAT1) where she reached the finals. In 2014 she was honored with the EMMAwards as best newcomer, which led to the release of her song " Not That Guy " in an by Eike Lüchow (formerly Stanfour) arranged power ballads version through Universal Music.

The musician wrote "ASAP"at the age of 15. In co-operation with the producer Andre Müther (D-LAY Production/Hypnotic Beat) an up-tempo pop dance track, with hit potential, was created! Content wise it is about a teenager's first crush and the feeling to like someone who doesn't notice it, but shyness holds one back to take the step towards the person. The song is supposed to inspire courage to lend expression to one's own emotions and thoughts but naturally also to spread a positive attitude - not only on the dance floors!

Apart from the radio version you will also find, House and EDM mixes by Grammy winner and remixer Philip Larsen (Manhattan clique), the Cologne DJ-duo Casa & Nova, who are currently mixing up the Dance charts with their EDM hymn RDY, as well as a version by the talented Saarbrücker producer P.N.O., on the "ASAP " release.

"She sang before she could even talk." Jenifers parents told in an interview, and so no one around her was surprised that she became a musician. Influenced by Selena Gomez, Beyonce Knowles and Christina Aguilera Jenifer knows exactly what she wants. The newcomer has very high demands for herself - her biggest idol is Mandy Capristo with whom she eventually wants to perform on stage together.

But first her new song will be released on 17/04/2015 through the KHB Music label in cooperation with Universal Publishing Production Music. Many dance-pop fans cannot wait for the release of "ASAP" and want to hear Jenifer Brenings new hit - of course as soon as possible!

About Jenifer Brening
Jenifer Brening is the singer & candidate of the German version of American Idol. As an 18-year old pop singer, she faces a bright future, gaining rapid popularity 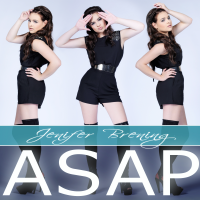