Smart Crowdfunding is slated to carry out strategic marketing initiatives for the ‘Magmount’ project on Indiegogo. The team behind this campaign are crowdfunding to bring their Magmount charging cable securement clip to market.

Zuelpich, Germany -- (ReleaseWire) -- 04/23/2015 --"Magmount", an inspired device to keep your charging cables in place, is being introduced to the public via a crowdfunding campaign on Indiegogo. This campaign has a funding goal of $20,000, which needs to be raised in order to begin production and bring Magmount to market. This small device is perfect for anyone who is tired of having their charging cables slip behind the desk, table or counter. No one likes to get down on the ground just to find a lost cable, or deal with the frustration of needing to move furniture just to get a slipped cable from behind the item. With Magmount, a person will never lose their cables again because the cables will stay exactly where they placed them.

Magmount is very small, discreet and simple to use. It features two pieces, a top piece that holds the cable, and a base plate that uses an adhesive foam pad to attach very securely to any surface. The two pieces lock together via a powerful magnet that is strong enough to hold the cable in place, but also weak enough for an easy release. In order to use Magmount simply pinch your cable together and slowly push it in the opening of the top cable clip, then attach the cable clip to the magnetic base plate. Magmount works with most cables, and helps keep a desk or workspace stay neat and tidy by keeping the cables secure and out of the way.

The team behind Magmount have been working very diligently with all of the essential groundwork for their device. They have several prototypes that are currently in use, and are now ready to launch the final design and production phase which is why they have launched their Indiegogo campaign. The funds raised with this campaign will enable the team to begin full production and manufacturing so they can bring Magmount to market. All supporters of this campaign have the opportunity to pre-order this very low-cost device, from a single Magmount to a dealer pack of 100 units, at a substantial savings. Full details can be found on their Indiegogo campaign page.

About Magmount
Magmount is the creation of Benjamin Anders from Zuelpich, Germany. He is in the process of starting his own business. He began this project from scratch, and has done all of the work himself, from the 3D Drawings, to distributor contacts. Magmount is his first creation.

To learn more about the Magmount crowdfunding project Click Here

To contact via email write to Benjamin Anders at: indieglobe@online.de 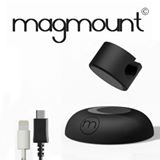